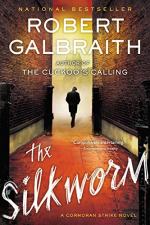 Robert Galbraith
This Study Guide consists of approximately 61 pages of chapter summaries, quotes, character analysis, themes, and more - everything you need to sharpen your knowledge of The Silkworm.

This detailed literature summary also contains Quotes and a Free Quiz on The Silkworm (A Cormoran Strike Novel) by Robert Galbraith.

The following version of this book was used to create the guide: Galbraith, Robert [J. K. Rowling]. Silkworm. Little, Brown and Company, 2014.

Silkworm is the second novel in the series by Robert Galbraith (aka J.K. Rowling) featuring private detective Cormoran Strike, a large, 6'3" ex-soldier with experience working in the Special Investigation Branch, the plain-clothes wing of the Royal Military Police. He was decorated for bravery when he was almost killed in an IED explosion in Afghanistan; riding on a dirt road in the back seat of a Victor, he instinctively pulled the soldier in the passenger seat into the back seat just before the explosion, saving the soldier's life as well as his own. The soldier whose life he saved, Richard Anstis, now works for the Metropolitan Police Department and the two men cooperate although they frequently disagree.

Silkworm follows the classic detective novel formula which begins with the introduction of the private detective, followed by the crime he feels called upon to solve, the investigation itself, the detective's theory of the solution to the crime, the explanation of the solution to the crime, and the denouement. This basic story or formula has a plot that includes Strike's work for wealthy clients and his former relationship with his ex-fiancée, which are entertaining but only tangentially related to the crime story. The major subplot that overlaps with the basic story line concerns Strike's assistant Robin Ellacott, who is a greenhorn partner-in-training by the end of the novel.

The novel's first six chapters introduce Strike, the case, and London's rarefied literary circle in which it takes place. Leonora Quine's husband Owen, the author of Hobart's Sin, has been missing for ten days. He's gone missing before, but his wife Leonora needs him to come home now. She says she is sure Strike will succeed because he solved the seemingly insolvable Lula Landry case that stumped the police. Strike turns down a wealthy client to take on her case, because the simplicity of her request convinces him of her innocence. Most of his clients want Strike to dig up information they can use to their advantage or they want more material benefits, but Leonora simply wants her husband to come home.

Strike's investigation begins with Christian Fisher, the founder of Crossfire Publishing, who fills him in on some of the figures in the current tight-knit literary scene: Daniel Chard, the CEO of Roper Chard Publishing; Michael Fancourt, a famous writer who has a nasty streak; Owen Quine, whose work after Hobart's Sin falls into the "so-bad-he's-good category" (40); and Quine's literary agent Elizabeth Tassel. Strike's investigation progresses by means of interviews with Owen Quine's family; his colleagues (mentioned above), along with his editor, Jerry Waldegrave; and two creative writing students, Kathryn Kent and Pippa.

Strike soon learns from Owen's agent Liz Tassel that she prematurely sent the manuscript of Quine's latest novel, Bombyx Mori (Latin for Silkworm), to Christian Fisher and Owen's editor, Jerry Waldegrave, before she had read it thoroughly. The novel is a roman à clef (literally, novel with a key), that is, a novel based on clearly recognizable living individuals. In this case, it has the characteristics of a poison pen letter that casts the characters in a disparaging light, which consequently makes it a novel no one will publish for fear of lawsuits. At an anniversary party for Roper Chard Publishing, Strike's date sneaks him a copy of Bombyx Mori.

Strike first hears about Joe North from Liz Tassel when he asks her about an old photo in her office. Liz tells him that the picture shows Liz with her first three clients: Michael, Owen, and Joe North. Unfortunately, Joe, who Liz thought was the most talented of them, died young from a full-blown case of AIDS back in the days when there was a lot of stigma and fear associated with the disease and no cure. Daniel Chard refused to publish Joe's book for this reason. Only Michael and Owen remained loyal to Joe all the way to the end. Quine's novel the Balzac Brothers dealt with the relationship among the three of them and Michael's novel House of Hollow dealt with Joe's bequest of his house, the place where they used to hang out, to Michael and Owen in joint tenancy. Michael completed Joe's novel, Towards the Mark, which became a cult classic. Naturally, Strike wants to see this house and gets a key from Leonora. There Strike finds the corpse of Owen Quine in the very studio where Joe died. Strike is so repulsed by the crime scene, he believes Quine's corpse must be the work of a deranged mind. To Strike the corpse appears more like a carcass: "trussed, stinking and gutted, lying on the floor instead of hanging from a metal hook where surely it belonged" (159). "Strike felt that he stood retching in a temple, witness to sacrificial slaughter, to an act of unholy desecration" (159).

Robin maintains, this murder was planned, thought out over a long period of time. Moreover, she notes that the libeled victims in the book could have taken legal action, so why did they have to kill him? She concludes, “This wasn't a crime of passion” (221). A combination of several remarks by witnesses, including the observations of a waitress at the River Café where Owen had made a scene, gel in Strike's mind and all at once he knows the solution to the crime and can explain it. Now he must prove it with physical evidence, which Robin and Strike's half-brother Al obtain. The unmasking of the victim leads to a wild car crash. In the denouement, Strike gives Robin a chance to develop her talent and learn the craft of detective work.

More summaries and resources for teaching or studying The Silkworm (A Cormoran Strike Novel).