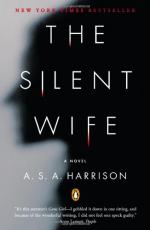 A. S. A. Harrison
This Study Guide consists of approximately 42 pages of chapter summaries, quotes, character analysis, themes, and more - everything you need to sharpen your knowledge of The Silent Wife.

This detailed literature summary also contains Quotes and a Free Quiz on The Silent Wife by A. S. A. Harrison.

"The Silent Wife" is the tale of a long-term relationship gone bad without any possible way to fix it. Jodi Brett and Todd Gilbert have been together for 20 years but Todd's infidelity lead to the demise of his relationship with Jodi, and, ultimately the end of his life. Todd is a successful entrepreneurial builder and Jodi is a part-time therapist who works out of their lovely high-rise condominium in Chicago. Jodi and Todd meet when she is driving a van filled with her household items during a move 20 years ago and they have been together ever since. Todd has been unfaithful throughout their relationship but Jodi has managed to look the other way in order to maintain the upscale lifestyle to which she has become accustomed. Todd's latest indiscretion is a college-aged girl named Natasha who also happens to be the daughter of his lifelong friend, Dean Kovacs. When it is revealed that Natasha is pregnant, Todd leaves the well-ordered home he has shared with Jodi to live in an apartment with Natasha who begins making plans for the baby and for a wedding. Todd cannot maintain two residences so Jodi is notified by Todd's attorney that she is to vacate the condo. Jodi is in disbelief that Todd is capable of removing her from the home and life they have shared for so many years. Ultimately, one of Jodi's friends, Alison, tells Jodi that she needs to take care of the situation before Todd marries Natasha and the assets in his will will revert to Natasha and the baby. Alison's ex-husband can make problems disappear for the right amount of money so Jodi begins to sell valuables for cash, so as not to leave a paper trail. Jodi then makes a trip to Florida to attend a psychology conference so that she will have an alibi when Todd is murdered. A few days before his scheduled wedding to Natasha, Todd has made a lunch date with a waitress he met a week before. He is happy on his way to the lunch but is suddenly startled to find that he has been shot while he sits in his car at a stoplight. Jodi is notified of Todd's death while in Florida and she returns to face the questions from detectives as well as the funeral. Todd's lawyer informs Jodi that all his assets will go to her since Todd would have waited to be married to Natasha to revise it to include her and the new baby. Jodi becomes reclusive and hallucinatory and ends up in the hospital for dehydration. One of the detectives visits her to tell her that it was Dean Kovacs who had Todd killed by hitmen and Jodi simply cannot believe the twist of fate. Alison has disappeared with the money that Jodi gave her to pay her ex-husband for the job. Jodi is barely affected by the new circumstances as she is allowed to retain her home and way of life, with all her problems solved.

More summaries and resources for teaching or studying The Silent Wife.