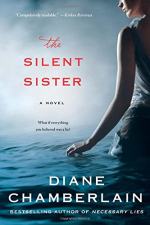 Diane Chamberlain
This Study Guide consists of approximately 55 pages of chapter summaries, quotes, character analysis, themes, and more - everything you need to sharpen your knowledge of The Silent Sister.

This detailed literature summary also contains Quotes and a Free Quiz on The Silent Sister by Diane Chamberlain .

The Secret Sister is Diane Chamberlain’s story of family tragedy and eventual redemption. The story’s main character and most prevalent narrator is Riley MacPherson who, at 25 has just lost her father and is technically an orphan. She still has a brother living, Danny, who is troubled and unreliable when looking for love or support. Moreover, the family has already lost Riley’s mother seven years before, and 16 years before that, Riley’s older sister Lisa committed suicide.

The story takes place in the span of a few weeks, during which Riley is tasked with returning to her father’s home in New Bern, North Carolina in order to clean out his house and settle his estate. The girl is bereft with loneliness and not ready to face the task ahead of her. Within the first few days of her arrival, surprises begin pouring in. Her father owns a strange PO Box in a neighboring town under a false name. He has left a sizeable and valuable collection of antique pipes to a random couple that live in his RV Park—Tom and Verniece Kyle. Her father’s personal RV is filled with postcards and pictures from people she doesn’t know, as well as a collection of music she didn’t know he liked.

During her first conversation with Tom and Verniece, Verniece insinuates that Riley was adopted. This is news to her, and while she does not readily believe it, the woman plants a seed of doubt in Riley’s mind about her family origins.

Riley employs an old family friend, Jeannie Lyons, and her daughter Christine, to help her clean her father’s things out and get the home ready for sale. The process is stressful for Riley, and soon into the process she finds Jeannie trying to smuggle out a box. While Jeannie is out of the room, Riley searches through the box and finds old newspaper articles that accuse her sister Lisa of murdering her violin teacher, Steven Davis. Jeannie bears out the story. Steven was Lisa’s violin teacher from an early age, and when Lisa was ready to apply for Julliard he apparently wrote a letter to the admissions staff that cast a negative light on her, and Lisa shot and killed him. Rather than face her trial, she drowned herself in the Potomac.

Riley knew nothing of the story, and when she goes to Danny with it, he is angry. He didn’t recall it either, but as they talk about it he remembers flashes of a day with blood and sirens, and later, his mother telling him that he must have made it up. For Danny, his life as a child revolved around Lisa; whether it was her violin playing or her untimely death, he felt that Lisa sucked the life force out of his family and his childhood. Even as an adult, his bitterness is palpable.

Riley has a difficult time with the Kyles. Tom is very unpleasant and while Verniece is nice, Riley suspects she isn’t authentic. Verniece confesses to Riley that they have many financial problems, and that they thought Riley’s father was going to deed the RV Park to them. It wasn’t in the will, and what’s more, Riley finds that her father has been paying them $500/month for as far back as she can see. She cannot figure out why her father owes the Kyles, and when she pushes Tom on the subject, he tells her that her sister is still alive.

At this point in the story, the perspective alternates between Riley’s current search for her sister, and Lisa’s past story of survival. More than 20 years ago, on the day she supposedly committed suicide, Lisa’s father and she drove to the Potomac in two cars, tried to share footprints in the snow, and dumped her kayak in the river. Lisa left behind her prized violin and a suicide note to her parents. Lisa’s father then put her in Tom Kyle’s car, who drove her to Philadelphia and left her on a train to San Diego. Once in San Diego, Lisa slowly acclimated, gaining a few friends, a job, even going to school to get a degree in music education. As the years went by, Lisa, who changed her name to Jade, fell in love and slowly expanded her circle.

Meanwhile, Riley hunts Tom Kyle down and asks him more, but he won’t give any information. His wife comes to Riley and says they will trade knowledge of where Lisa is for the deed to the RV Park, which is worth more than $200,000. Riley agrees immediately, motivated by a longing for family and a desire to know where her sister is. Before the gift deed is recorded, Tom tells Riley only that her father masterminded the entire plan, and that Tom drove her to the train station. After that, he didn’t know where she went. Riley deems that information not worth the RV Park, and calls off the deal.

Eventually, Danny catches the scent of what Riley is up to and gets involved. He hacks into the police records online and finds a tidbit of information previously unreleased to the public: there were two sets of footprints at Lisa’s suicide scene. Danny is keen to find his sister, but for different reasons than Riley: he is eager to see her punished for her actions.

Eventually, a private investigator comes looking for Lisa. She is in the back of the music store where she works when she hears a man asking about her in the front. Her boss, Grady and her girlfriend’s grandfather, Charlie do not help the investigator, but instead encourage her to leave. Jade packs all she owns and leaves San Diego for Portland, where her girlfriend Celia lives. Once she arrives there, she breaks down and tells Celia everything.

Riley contacts Steven Davis’s widow, Sondra, and talks to her about her search for her sister. She very carefully says that she feels her sister is truly dead, but is interested in what Sondra’s investigator found. All Sondra can say is that they tracked Lisa as far as San Diego. Riley follows the lead to San Diego and eventually finds Grady, the man who owned the shop Lisa worked in. He does disclose that she worked for him, that she went by Jade, and that she disappeared to Portland. With that end exhausted, Riley returns home.

Because Jeannie and Christine are too much in Riley’s space, and also because her nerves are frayed, Riley abandons the estate sale and sends Jeannie and Christine away. However, while working alone among her father’s papers she finds her birth certificate and starts questioning why she was born in Asheville while her siblings were born in Alexandria. That, taken with the fact that her siblings are fair, almost white-haired, and Riley has dark, wavy hair, leads her to call Jeannie frantically. Jeannie comes over and discloses that Lisa got pregnant at age 15 and had to go live with Jeannie in Asheville so that the local music community wouldn’t know. Lisa’s baby was Riley, and although she had planned to give the baby up for adoption, she found she couldn’t part with her, so Lisa’s parents—the people whom Riley saw as her own parents—adopted her. Lisa wore a white jade pendant inscribed with the Chinese symbols for ‘mother’ and ‘daughter’; a gift from Jeannie that she never took off.

Riley feels abandoned all over again. Her real parents, while not dead, are lost to her nonetheless. Jeannie tells her that her real father was a boy that Lisa met in Italy on a concert trip, but Riley wonders if it’s actually Lisa’s close childhood friend, Matty. Matthew is now a man with dark curly hair, similar to Riley’s own.

The next day Riley tries to track Matthew down, but he is away on a trip to Japan and is unreachable. She looks through her father’s emails and finds several from someone named Celia, whom she now knows is her mother’s girlfriend. The emails lead her to a search of her father’s personal RV, to the postcards and pictures of children and a few CDs by a bluegrass band called Jasha Trace—a band comprised of two men and two married women, one of them a violin player that wears a white jade pendant.

The pieces fall into place: her father’s random PO Box. The pictures of random children that must be Jade’s and Celia’s. Her father’s interest in bluegrass music. Riley scours the internet for more info on Jasha Trace and sees her mother all over the website. She shares the information with Jeannie: that Lisa, now Jade, is alive and living in Seattle. What’s more, Jasha Trace will be in New Bern in a matter of days for a concert, one they must have planned in order to see Lisa’s father.

Riley’s joy and anticipation is marred by the knowledge that Danny has figured all of this out on his own, and what’s more, he plans to tell his police officer friend and have Jade arrested at the concert. Riley decides to warn Jade: she takes the old violin that Lisa had played as a teen and drives to a neighboring town, where the band has another concert planned. After the concert, she makes her way backstage and into the dressing room where her mother and Celia wait.

There is a tearful reunion between Jade and Riley, but Celia is angry that Riley has brought danger to their door. She tells them that Danny knows and will met them in New Bern at the concert, possibly with police in tow. They talk for a while and Riley eventually gets angry at her mother for moving on with her life while she and Danny suffered so miserably. She leaves the dressing room in anger.

Celia, unbeknownst to Jade, follows Riley to her apartment and tells her the real truth of her mother’s past: that she was sexually abused and assaulted by Steven Davis, the violin teacher, who is actually Riley’s father. The day he was killed he had actually come to Lisa and threatened to take Riley away from her because his wife was unable to conceive. He reached for her, and Lisa shot him. Celia tells Riley this because in court, Steven’s abuse would have made an excellent motive, and Lisa would have certainly been convicted. Riley feels less like she was abandoned and more defensive on her mother’s behalf. Even more desperate to keep Danny from arresting her, Riley leaves her apartment in the middle of the night and rushes to Danny, but she hits a deer and runs off the road.

The next morning, Jade, Celia, Jeannie, and Danny all converge at the hospital. Jeannie and Celia wait outside while the MacPherson “siblings” have a reunion by Riley’s bed. Jade and Danny argue and Riley has to yell for them to stop. Danny is still convinced that Jade should atone for her crimes; but out of love for Riley, who desperately wants her mother in her life, he promises to keep the secret. The novel ends with Riley living a mile from Jade, moving forward and forgetting the past.

More summaries and resources for teaching or studying The Silent Sister.