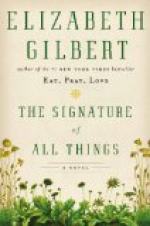 Plot Summary
+Chapters Summary and Analysis
Prologue and Part 1, The Tree of Fevers: Chapters 1-4
Part 2, The Plum of White Acre: Chapters 5-11
Part 3, The Disturbance of Messages: Chapters 12-20
Part 4, The Consequence of Missions: Chapters 21-26
Part 5, The Curator of Mosses: Chapters 27-31
Free Quiz
Characters
Symbols and Symbolism
Settings
Themes and Motifs
Styles
Quotes
Order our The Signature of All Things Study Guide

The Signature of All Things - Prologue and Part 1, The Tree of Fevers: Chapters 1-4 Summary & Analysis

Elizabeth Gilbert
This Study Guide consists of approximately 36 pages of chapter summaries, quotes, character analysis, themes, and more - everything you need to sharpen your knowledge of The Signature of All Things.

Alma is born in January of 1800 to a Dutch mother and English father. Alma is the only biological child of Henry and Beatrix Whittaker to survive to birth. Alma’s birth is not especially celebrated in the Whittaker home.

Henry Whittaker was born in 1760 in Richmond, outside of London. Henry’s father is the orchard man at Kew, the botanical gardens. Henry is not impressed with his father or his lack of ambition and vows to be better. Therefore, when Henry is given a job at the Kew, he begins stealing plants from the greenhouses to sell to Sir Joseph Banks, the director of the Kew, competitors. Henry makes a good amount of money by doing this, but is eventually caught by his own father. Henry’s father turns him in in order to...

(read more from the Prologue and Part 1, The Tree of Fevers: Chapters 1-4 Summary)

More summaries and resources for teaching or studying The Signature of All Things.

The Signature of All Things from BookRags. (c)2021 BookRags, Inc. All rights reserved.