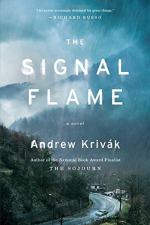 The Signal Flame: A Novel Summary & Study Guide includes comprehensive information and analysis to help you understand the book. This study guide contains the following sections:

This detailed literature summary also contains Quotes and a Free Quiz on The Signal Flame: A Novel by Andrew Krivak.

The Signal Flame, a novel by Andrew Krivak, focuses on family and loss. The story begins with a short vignette that places the novel's setting as just after the death of Jozef Vinich, the family patriarch. The vignette tells how Jozef immigrated from Austria-Hungary to America after World War I. Eventually, he made his own way to Dardan, Pennsylvania. As a self-made man. Jozef was well-loved and well-respected in the community. His wife, Helen, preceded Jozef in death. Jozef was especially loved and revered by his widowed daughter (Hannah) and his grandsons (Bo and Sam).

Now, with the death of Jozef and with Sam missing in action during the Vietnam War, Hannah and Bo must rely on one another to get through each day. Bo provides what comfort he can to his younger brother’s fiancée, Ruth, and he urges his mother to look beyond the loss of the past.

In the past, Hannah’s husband (Bexhet) was killed in a hunting accident by Ruth’s father, Paul. Twenty years later, Paul is haunted by the accident. However, he still feels hatred toward Jozef for what Paul considers to be the theft of Younger family land. Though Hannah knows the death was an accident, she cannot let go of the past and harbors anger for Paul. Complicating matters is the fact that Ruth is pregnant with Sam’s baby.

Bo and Father Rovnavaha, the town's priest, mediate an end to the bad feelings. Meanwhile, Bo continues to work at the lumber mill which he now owns, having purchased it from his grandfather some years before Jozef's death. Bo knows the Younger land he now owns through Jozef’s will was not stolen. It was purchased fair and square from Walter, Paul’s father. Walter had sold it to support his addiction to alcohol and to gambling. Jozef had allowed Walter to remain in his home on the land until Walter’s death.

During a bad rainstorm that brings flooding to the valley, Ruth goes into labor. When Bo hears the call for an ambulance on the radio, he knows Ruth is in labor. He drives out after them when he learns they could not wait for medical help. He discovers their car has gone off the road and into a rapidly-flooding ravine. Bo rushes in and discovers Ruth has already given birth. However, the baby girl is dead. Ruth’s father and aunt are also dead, but Bo is able to save Ruth.

Hannah and Bo decide that they will have Ruth live with them, as family is family. They all hold out hope that Sam will come home soon. Finally, Ruth realizes there never was any family feud. Slowly, Bo fixes up the old Younger house with the intent to move in one day. As the months pass, he and Ruth grow closer. Together, they take a trip to West Virginia to see Sam’s old commanding officer, Burne Grayson, who first reported Sam missing. Burne recommends putting up a grave marker for Sam. This is a sobering dose of reality for Bo and Ruth.

As time passes, Bo and Ruth realize they are attracted to one another. They take things slow with the blessings of both Hannah and Father Rovnavaha. Hannah is faithful, and she considers it all a part of God’s mysterious ways. Eventually, Ruth moves into the old Younger house with Bo. A future marriage and family seem all but certain. As the novel ends, Bo and Ruth are sitting out on their porch together when they see Sam appear on the hill before them. Ruth cannot go to meet Sam, but Bo does.

The Signal Flame: A Novel from BookRags. (c)2022 BookRags, Inc. All rights reserved.