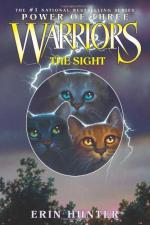 The Sight Summary & Study Guide includes comprehensive information and analysis to help you understand the book. This study guide contains the following sections:

This detailed literature summary also contains Topics for Discussion on The Sight by Warriors (book series).

"There will be three, kin of your kin, who hold the power of the stars in their paws." This is the Prophesy, delivered in a dream by an ancient cat to Firestar, the ThunderClan leader. Presently, it's time for three ThunderClan kits to become apprentices. The three are Hollykit, Jaykit and Lionkit, and the story centers around them. The kits are the offspring of Squirrelflight and Brambleclaw, noble ThunderClan warriors, and grandkits of Firestar himself. The question is, will the youngsters prove their worth and become assets to the Clan?

The trio's first trial involves a scrap with some fox cubs who turn out to be more than they bargained for, and Jaykit falls into a hole, loses consciousness and wakes up in Leafpool's medicine den. The medicine cat advises Jaykit that he will never become a warrior because of his handicap (he is blind), but that he will make a splendid medicine cat. Jaykit is disconsolate, and Hollykit, scheduled to become a warrior apprentice, announces that she wants to be a medicine cat!

The kits' sixth moon arrives and they become Hollypaw, Jaypaw and Lionpaw. Jaypaw, we learn has some amazing extrasensory capabilities, but he's unhappy and conflicted because he wants to be a warrior. When Lionpaw goes out hunting with Ashfur and Brambleclaw, the impetuous Jaypaw ventures into the forest, falls into a lake and nearly drowns before WindClan cat Crowfeather rescues him and escorts him back to the ThunderClan Camp. Millie, a kittypet, joins the Clan, and Jaypaw bemoans his lot. "I don't care about having stupid dreams," he hisses. "I'm going to be a warrior!"

ThunderClan gets into a knock-down drag-out battle with ShadowClan over a border marking incident. Millie proves her merit as a warrior; Jaypaw visits the Moonpool to seek an answer to his dilemma; Hollypaw announces to mentor Leafpool that she wants to be a warrior cat, and Jaypaw becomes Leafpool's reluctant apprentice. Lionpaw, meanwhile, proves to be a mighty warrior and a standout in a battle with the Twolegs' dogs. Jaypaw is jealous and resentful and unhappy about his medicine cat apprenticeship. But when Poppypaw and others come down with greencough he gets to do some serious doctoring and proves his worth to the Clan. But more glory is ahead for the youngster. Using his special extrasensory abilities he rescues Lionpaw from an old badger set which has collapsed on him and earns the praise of Clan leader Firestar who declares that Jaypaw is an especially valuable member of ThunderClan and that he, Hollypaw and Lionpaw are the three cats indicated in the Prophesy.