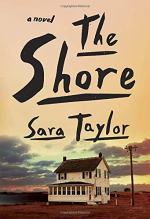 Get The Shore from Amazon.com
View the Study Pack
Study Guide
Order our The Shore Study Guide

Sara Taylor
This Study Guide consists of approximately 61 pages of chapter summaries, quotes, character analysis, themes, and more - everything you need to sharpen your knowledge of The Shore.

The Shore Summary & Study Guide includes comprehensive information and analysis to help you understand the book. This study guide contains the following sections:

This detailed literature summary also contains Quotes and a Free Quiz on The Shore by Sara Taylor.

The Shore by Sara Taylor is the saga of several families that live on the titular island chain off the coast of Virginia between 1873 and an imagined post-apocalyptic 2143. The novel is non-chronological and shifts to a different perspective and a different time period in each chapter, as well as fluctuating between first, second, and third person and past, present, and future tense, all of which can be disorienting at first. However, the novel gradually reveals how the stories of the various characters are, in fact, intertwined: some of the characters are related by blood or marriage, others by friendship or locale or in one case, the accidental inheritance of a vodka distillery.

One of the novel’s central stories is that of Chloe Gordy, who does her best to fend for herself and her younger sister Renee after being left motherless at 13. The girls tiptoe around their morose and volatile father, a meth addict who works at a chicken factory and largely ignores them. They live in a dilapidated little house that they rent from the Lumsdens, a wealthy farming family. When Chloe’s father becomes enraged with her after learning that she got into a fight with three bullies, he tries to beat her and Renee, and Chloe kills him with a skinning knife in self-defense. Chloe spends the rest of her youth in a psychiatric hospital. Many years later, an adult Chloe returns to the Shore seeking information about her parents’ pasts and discovers that the man whom she considered her father, along with his friend, both raped her mother and that she was most likely conceived in this way.

In the ninteenth century, Medora, the illegitimate, half-Shawnee Indian daughter of a Kentuckian plantation owner by one of his field hands, came to the Shore to live. The Lumsdens who continue to occupy this house throughout the twentieth century are descended from her. Medora’s father had defied convention by attempting to raise her under his own roof as a proper Southern lady, but their tempers clashed and Medora determined to escape. She conspired with Andrew Day, a penniless young swindler, to murder her father and inherit his estate. They then used this money to buy a plantation on the Shore, where they lived together as a couple and had two children, although they were never officially married. Andrew, however, eventually began to pursue a white gentlewoman whom he considered a more respectable prospect for a wife. He and Medora had a violent fight, and she later gelded him in revenge. Then Andrew was arrested for one of his previous financial scams, and Medora and her new husband reclaimed the plantation house.

Medora’s knowledge of plant medicine and her husband’s weather mage abilities are eventually passed down to their great-great-granddaughter Sally Lumsden. Sally is also the one who inherits the Lumsden estate and commits her life to caring for the family farm, after initially considering moving away and pursuing a career as a pharmacologist. Instead, she stays on the Shore and becomes a messianic figure when she predicts and prepares for a catastrophic plague that annihilates most of the world’s population in the mid twenty-second century. Sally leads a band of followers, including Chloe, into the wilderness of Assateague, the remotest of the chain’s islands, and establishes a fledgling civilization there.

These three women — Chloe, Medora, and Sally — comprise the core of the novel, but none of them dominate it. Instead, most of the pages are occupied by a diverse cast of supporting characters who together present a more comprehensive picture of life on the Shore. There are Bo and Ellie, Chloe’s parents, whom the reader sees in their youth before they were married, when they worked on the same construction crew and came from similarly troubled households. There are Bo’s older siblings Benny and Mo, who both turn out as law-abiding, nonviolent, functional adults and consider Bo something of a rotten egg. The reader is also introduced to Izzy and Becky, two young women who each spend their respective POV chapters brooding over their unintended pregnancies. Izzy, who lives in a trailer with her abusive boyfriend, decides to leave both him and the Shore; Becky, whose boyfriend Pierce, the black sheep of the Lumsden family, has little respect for her but does not hit her, decides to stay. Tamara Lumsden, Pierce’s granddaughter, survives the plague by being an asymptomatic carrier and hiding out in the shack where Chloe’s family once lived — and she, by contrast, has an obsessive desire for a baby. She conceives three times, first by the man she loves and then by his brother and their father (infecting the latter two with the plague in the process), before finally giving birth to an infant that turns out to be severely deformed.

The Shore concludes on a surprisingly optimistic note, with a thirteenth chapter that shifts from the tone of harsh realism that defined the rest of the novel to that of a whimsical folktale. It is set in 2143 among the primitive society of Islandmen that survived on Assateague after most of the world fell to the plague. The narrator is Simian, who discovers a copper still left behind by 1920s bootleggers and uses it to brew the “tears of the gods,” thereby making his fortune and winning his beloved Jillet for a consort. Theirs is a gentler and more innocent society than that of the twentieth century: they hang seashells on trees to make their wishes come true, cherish daughters more than sons, and are governed by a “Bigman” whose duty it is to adopt all the orphans — and one gets the impression that it is more akin to what the author would consider an ideal model for human behavior.

More summaries and resources for teaching or studying The Shore.

The Shore from BookRags. (c)2022 BookRags, Inc. All rights reserved.