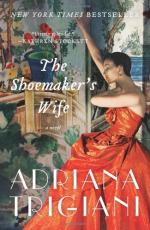 Adriana Trigiani
This Study Guide consists of approximately 64 pages of chapter summaries, quotes, character analysis, themes, and more - everything you need to sharpen your knowledge of The Shoemaker's Wife.

This detailed literature summary also contains Quotes and a Free Quiz on The Shoemaker's Wife by Adriana Trigiani.

The Shoemaker's Wife by Adriana Trigiani is the historical love story of Ciro Lazzari and Enza Ravanelli. Though they live just a few miles apart in the Italian Alps during childhood, their first meeting occurs when they are teenagers. Shortly afterward, their lives go in different directions. Several years later, a chance encounter leads them to realize that they love each other. The author states that she drew upon her own family history as inspiration for the fictional characters and narrative.

The story begins as Ciro and his brother, Eduardo, are taken to the San Nicola convent following the sudden and mysterious death of their father in America, where he had gone to build his family's fortune. Faced with the burden of full financial responsibility for the family, Caterina, their mother, takes the boys to the convent where they will be cared for by nuns. Caterina promises to come and pick up her sons in the spring, but she doesn't show up because she suffers a mental breakdown and then secludes herself in another monastery. Communication with Ciro and Eduardo ceases for a period of years, even though she lives within shouting distance of her children. The young men have difficulty adjusting to life in a religious order following their family catastrophe and lack of any parental support.

Ciro witnesses a priest at the convent making out and fondling the beautiful Concetta Martocci, a teenaged girl that Ciro loves. Ciro tells the nuns at the convent of the lustful encounter, and in retaliation he's shipped off to America by the priest Don Gregorio. There, Ciro apprentices himself to a shoemaker, Remo Zanetti, in the New York neighborhood called Little Italy. It is, indeed, very much like a small Italian city with abundant Italian foods, culture, and the living language historically derived from Latin. But, more importantly, Ciro learns a trade at the Zanetti Shoe Shop where "The painstaking craft of building a proper boot or shoe from simple elements gave Ciro a purpose he had never known before."

At about the same time, Enza also goes to America and lives for a time in Hoboken, N.J. Eventually, Ciro and Enza encounter each other in Little Italy, and their love affair begins to blossom. But, when World War I breaks out, Ciro volunteers for military service and is shipped to the front in Europe. Assuming they'll never meet again. Enza becomes a costumer to opera great Enrico Caruso and moves from Hoboken to Manhattan with her friend and roommate. When he returns from the war, Ciro is still recovering from the fact he was sprayed with mustard gas during battle. But, he and Enza find each other again, marry, have children, and radiate love for each other and their family.

As Ciro and Enza mature, their love becomes an outgoing, positive force that touches several generations and extends from Italy to New Jersey to New York to Minnesota and, finally, back to Italy. The author skillfully weaves the tapestry of everyday life into a complex web of love. However, the journey is not without sorrow when Ciro develops cancer because of his mustard gas injuries and dies, but the love he shared with Enza continues in the lives of their children and family in both America and Italy. The author conveys a sense of the extraordinary arising from the ordinary, through love, which becomes the book's primary message.

More summaries and resources for teaching or studying The Shoemaker's Wife.