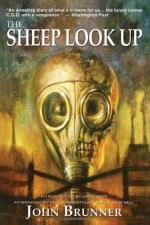 The Sheep Look Up Summary & Study Guide includes comprehensive information and analysis to help you understand the book. This study guide contains the following sections:

This detailed literature summary also contains Topics for Discussion on The Sheep Look Up by John Brunner (novelist).

"The Sheep Look Up" is a science fiction novel that describes the decline of the United States in an environmental disaster that results in widespread disease and death. It follows several characters over the course of a year as their paths intertwine while they struggle to cope with the drastic changes in the environment. Written in the early 1970s, the story takes place in a fictional future when much of the country is under permanent cloud cover and the air is too polluted to breath without wearing filter masks. Food and clean drinking water are in short supply. Throughout the country, a movement of environmentalists calling themselves "Trainites" after their inspiration, a scientist named Austin Train, spray-paint slogans and symbols on polluting cars and buildings. Some of them live in "wats," commune-like compounds where they try to live as cleanly as possible.

Austin Train himself has gone into hiding after inspiring the movement by trying to warn the public of the dangers of their way of life. He works as a garbage man while the situation around him worsens. Meanwhile, in Africa and Honduras, people have become crazed after eating a food-product called Nutripon, made in the United States. The insanity is traced to a substance somehow introduced into the product, perhaps intentionally. As international tensions rise, the environmental damage in the US rapidly increases. An epidemic of diarrhea sweeps the country. The rate of birth defects increases. Insects that have become resistant to insecticides plague food crops. The insurance industry is faced with a declining life expectancy and an increase in environmental disasters. A company trying to profit from the crisis by selling water filters finds the water so dirty the filters clog up. People in the US begin to show signs of insanity similar to those in Africa and Central America. The US government declares that the nation is under attack by biological means, imposes martial law and begins to round up Trainites. Several outspoken critics of the government are killed.

At the height of the crisis, Austin Train emerges and goes on a national television interview program. He is immediately arrested on a trumped-up charge for a kidnapping that was actually committed by one of his devotees using his name. He exposes the farce of his trial on national television and gives a dramatic explanation of how the nation has become so poisoned it is doubtful it will survive. The novel abruptly ends at this point with the suggestion that the only way for the planet Earth to survive as a whole is if the United States and its consuming and polluting culture disappears.