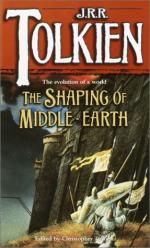 The Shaping of Middle-earth: The Quenta, the Ambarkanta, and the Annals,... Summary & Study Guide

The Shaping of Middle-earth: The Quenta, the Ambarkanta, and the Annals,... Summary & Study Guide Description

The Shaping of Middle-earth: The Quenta, the Ambarkanta, and the Annals,... Summary & Study Guide includes comprehensive information and analysis to help you understand the book. This study guide contains the following sections:

This detailed literature summary also contains Topics for Discussion and a Free Quiz on The Shaping of Middle-earth: The Quenta, the Ambarkanta, and the Annals,... by J. R. R. Tolkien.

Christopher Tolkien mostly describes the original "legendaria" or legendary material that is found in The Book of Lost Tales as it evolved to The Silmarillion, the detailed great historical narrative of the World of The Lord of the Rings, mythology, cosmology and all. The book includes a number of important manuscript edits, and many maps and other diagrams.

The Shaping of Middle-Earth contains seven texts that vary widely in length. Chapter 1 is the Prose Fragments Following the Lost Tales, which are brief bits of manuscript that cover the time of Tuor in Gondolin and the Nordoli's departure from Valinor and their coming to Middle-Earth; Christopher Tolkien speculates that it was written around 1920.

Chapter 2 is The Earliest "Silmarillion" otherwise known as the "Sketch of the Mythology." The "Sketch" is a condensed overview of Tolkien's World's mythology. It was written alongside of The Lay of the Children of Hurin though it was later revised; it is thought to have been written in 1926 and revised between 1926 and 1930.

The third text is the Quenta or Noldorinwa which is a re-worked and greatly expanded "Sketch of the Mythology." It gives a detailed history of the Ages prior to the period that the reading public is most familiar with, the Third Age in which the Hobbit and The Lord of the Rings takes place. Various earlier details are different, less specific and less coherent. The piece includes a poem known as The Horns of Ylmir and includes a translation of the Quenta into Old English; the piece is thought to have been written in 1930.

Chapter 4 is the first Map that was the basis of writing the "Silmarillion." The Map was used quite often and the text has a large number of comments on the various locations of important. It was written in 1926, though greatly revised later.

Chapter 5, The Ambarkanta, explains the shape and geography of The World alongside its associated maps and was written in the middle of the 1930s. The next text is The Earliest Annals of Valinor which is a list of dates associated with the great events that occurred on those dates. It starts at the creation of The World and ends when the Nordoli go to Middle-Earth. The Annals are also given in an Old English translation.

The final text is The Earliest Annals of Beleriand which ranges from the creation of the Sun and the Moon to the Great Battle against Morgoth, though there is a revision at the end. Further included is another Old English translation. Both of the latter pieces were written in the early 1930s.

The Shaping of Middle-earth: The Quenta, the Ambarkanta, and the Annals,... from BookRags. (c)2022 BookRags, Inc. All rights reserved.