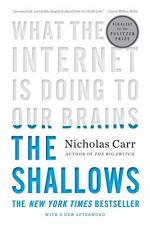 Nicholas Carr
This Study Guide consists of approximately 29 pages of chapter summaries, quotes, character analysis, themes, and more - everything you need to sharpen your knowledge of The Shallows.

The Shallows Summary & Study Guide includes comprehensive information and analysis to help you understand the book. This study guide contains the following sections:

This detailed literature summary also contains Topics for Discussion on The Shallows by Nicholas Carr.

The following version of this book was used to create this study guide: Carr, Nicholas. The Shallows: What the Internet Is Doing to Our Brains. W. W. Norton Company, 2011.

Nicholas Carr, the author and narrator of The Shallows, roots his argument about the way that the Internet changes people’s brains in the work of Marshall McLuhan, who advocated for the medium as a key influencer of how people perceive content. He likens the feeling of technology overtaking people’s lives to that which was experienced by HAL, a supercomputer in Stanley Kubrick’s 2001: A Space Odyssey. Over the centuries of technological innovation, many scholars have noted observing changes in their work and process once they changed the medium that they used to create content. Neuroscientist Michael Merzenich identified the brain’s ability to change as neuroplasticity.

Carr outlines the way that people’s minds mature through the way they draw pictures and maps. New technologies provide people with tools to gain more control over their experiences. Carr explains two main outlooks on the role that technology has in shaping through society, through a technological determinism lens and an instrumentalist lens. New technologies have a history of influencing the society of its time. Carr reflects on early writing and the way that the introduction of the printing press revolutionized writing.

Carr reflects on the introduction of mass-produced computers and the Turing machine. The Internet is like a Turing machine in that it can process complex multimedia content. It is unique in its ability to allow users to both send and receive messages from other people online. Much of the Internet’s content is remediations of media that previously existed in print, which has negatively impacted other industries, like newspapers, and affected the way that people expect to see content, typically in the form of short segments. Carr uses Amazon’s Kindle e-reader device as an example of the way electronics have changed the expression of reading.

Carr explores the interactive nature of the Internet, which captures its users’ attention, yet creates more distractions that leads to inattentiveness. He cites evidence of the Internet having an effect on people’s brain patterns. This leads to a discussion of short- and long-term memory. The Internet introduces users to a large cognitive load that is difficult to process and so they must develop hypertext literacy in order to effectively browse the Web. He uses Google as a case study, since it focuses on the Taylorist ideology of extreme efficiency in organizing relevant information for each user’s search. This speediness leads to competition and commercialization of the online marketplace, which Carr believes may be at the expense of deep thought.

Carr examines memory and the idea that computers could serve as a substitute for human memory. Although, he predicts that this transfer would result in a loss of personal identity and culture. He reflects on his process of disconnecting from technology in order to write his book. He discusses ELIZA, an artificially intelligent software program that can interact with users. He relates this back to HAL in Kubrick’s 2001, wherein the AI develops emotions and human intelligence becomes artificial.

More summaries and resources for teaching or studying The Shallows.

The Shallows from BookRags. (c)2022 BookRags, Inc. All rights reserved.