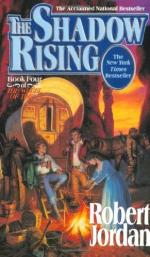 Robert Jordan
This Study Guide consists of approximately 52 pages of chapter summaries, quotes, character analysis, themes, and more - everything you need to sharpen your knowledge of The Shadow Rising.

This detailed literature summary also contains Topics for Discussion and a Free Quiz on The Shadow Rising by Robert Jordan.

The Stone of Tear, the impregnable fortress that was foretold to stand until the Dragon Reborn's arrival, has fallen, and Rand Al'Thor, a shepherd from the Two Rivers, holds Callandor, the Sword That Is Not a Sword, a weapon for magnifying the One Power.

Rand has been studying the prophesied of the Dragon and has determined that he must go to Rhuidean, the forsaken city of the Aiel, and become the Aiel Car'a'carn, the chief of chiefs. He travels to Rhuidean with Moiraine Sedai, Lan, Egwene, and the Aiel who helped him take the Stone of Tear.

Nynaeve, Elayne, Thom, and Juilin Sandar voyage to Tanchico, an exotic city on the western coast, to try to stop Liandrin and her group of Black Ajah from acquiring a powerful ter'angreal they hope will allow them to control Rand. Moghedien, a member of the Forsaken, is weaving a trap around the item, and Nynaeve is forced to confront the women in a fierce duel with the One Power. Nynaeve succeeds in defeating Moghedien, though the woman escapes. Nynaeve and Elayne give the powerful ter'angreal to Bayle Domon, with instructions to drop it in the sea.

Meanwhile, in the White Tower, Elaida Sedai has put together enough of the pieces of the conspiracy involving Siuan Sanche and Moiraine Sedai to have Siuan deposed as Amrylin Seat. Siuan and her keeper Leane are removed from office and stilled, that is, their ties to the One Power are severed. Min rescues them before they are executed, and the three women sneak out of Tar Valon with the gentled false dragon Logain.

Rand journeys with Mat into Rhuidean and sees a vision of the origins of the Aiel people. He returns marked as the Car'a'carn and attempts to rally the Aiel clans, encountering resistance from the Shaido clan, who put up one of their own, Couladin, as the Car'a'carn. The chiefs determine that Rand is the true chief of chief and in the ensuing fight, Rand learns that two member of the Forsaken, Lanfear and Asmodean, have been traveling with him incognito, and that Asmodean has used the distraction caused by the fighting Aiel to return to Rhuidean to retrieve a powerful ter'angreal. Rand races Asmodean to the ter'angreal and succeeds in overpowering him.

More summaries and resources for teaching or studying The Shadow Rising.