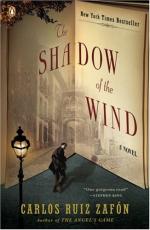 The Shadow of the Wind Summary & Study Guide

Carlos Ruiz Zafón
This Study Guide consists of approximately 57 pages of chapter summaries, quotes, character analysis, themes, and more - everything you need to sharpen your knowledge of The Shadow of the Wind.

The Shadow of the Wind Summary & Study Guide Description

The Shadow of the Wind Summary & Study Guide includes comprehensive information and analysis to help you understand the book. This study guide contains the following sections:

This detailed literature summary also contains Topics for Discussion and a Free Quiz on The Shadow of the Wind by Carlos Ruiz Zafón.

Summer of 1945, Barcelona, Daniel Sempere, a young boy of 10, is taken to the Cemetery of Forgotten Books by his father, a secondhand book merchant. The Cemetery of Forgotten Books is a secret place, where a huge collection of books that have been forgotten or have fallen into oblivion is kept. Here under the watchful eyes of his father and Sr. Isaac, the guardian of the Cemetery, Daniel chooses a book, The Shadow of the Wind, written by an unknown author, Julian Carax. From that day, Daniel embarks on a search to find out more about the book, its mysterious author and his life story. This book threads its way into Daniel's life deeply, and the lives of the author and the reader begin to intertwine.

All that is known of the author is that he is a young Spaniard who lived in Paris. He apparently disappeared after a duel. Someone has been destroying all of Julian Carax´s work, and is after the last copy of The Shadow of the Wind. A deeper tone of suspense and mystery begins to surround this fascinating book and it's author. Strange coincidences occur as more people become involved in the pursuit Julián Carax's life story.

Daniel befriends a street dweller named Fermín, a political dissident, and takes him in to work with his father. Fermín too gets caught up in Daniel's search for the truth about Julian Carax. With Fermín's sleuth-like help, they encounter the various characters that participated in Julián's fate and slowly this story begins to be unraveled. The deeper they delve into Julian's story, the more danger begins to surround them.

Daniel and Fermín finally come across Nuria Monfort, who had worked with Julián's publisher. Nuria was in love with the young author. With the shared mission of saving Julián's work, Nuria meets and eventually marries author's best friend Miquel Moliner. It is Nuria who tells the full story to Daniel.

Julian Carax, the son of a humble hatter and a French piano teacher, was befriended by a rich Barcelonan businessman, Don Ricardo Aldaya, who took Julián under his wing and sponsored his education at an expensive school. Julián is a welcome guest at the Aldaya's home, a large mansion called the Angel of the Mist.

At school, Julián made a group of friends which included Jorge Aldaya, Miquel Moliner, and a strange boy, Francisco Javier Fumero. Little did they know that Fumero, riven by envy, humiliation and unrequited love, develops a wild hatred for the other three.

Julián fell in love with Ricardo Aldaya's daughter, Penelope. Neither knew that young Fumero also lusted over Penelope. When their love affair is discovered, the young couple plans to run away to Paris with the help of their good friend Miquel Moliner. Penélope however does not manage to make it to the station, as her parents lock her in her room. Julián believes that Penelope had changed her mind. Unknown to Julián, Penelope is imprisoned in that room until she gives birth to a stillborn baby and consequently dies as a result of a hemorrhage.

Meanwhile, in Paris, Julián is taken under the wing of the owner of a brothel where he made his living by playing the piano. Julián writes and publishes a few novels, including The Shadow of the Wind. During this time he has a love affair with Nuria Monfort, who works with his publisher in Spain. Julián lives a simple and uneventful life until he is involved in a duel with Jorge Aldaya, Penelope's brother, who is killed. Carax flees to Barcelona, to find out the whole story. In his despair, he attempts self destruction through a mad obsession to destroy every last copy of his books. He once again receives the help and support of his friend, Miquel Moliner, who tries to protect his friend from Fumero. Moliner by this time is very ill and married to Nuria Monfort. Carax uses the Angel of the Mist as his hideout. Miquel, who is moribund, lends his identity to Carax, and is killed by Fumero's men. Fumero, on his path of destruction, murders Nuria who leaves a letter to Daniel telling him the whole story.

Fumero, realizing that he has had the wrong man killed, continues desperately to seek Carax and uses Daniel to lead him to his detested foe. Daniel, now eighteen is deeply in love with his best friend's sister, Bea. Their secret love encounters are held at the Angel of the Mist, where they inadvertently lead Fumero to Carax. A final deadly battle takes place between Fumero and Carax, during which Daniel and Bea's lives are endangered. The final outcome of the battle between good and evil is Fumero's demise.

Daniel's story has a happy ending, marrying his love, Bea, and with the support of his loving father and good friend Fermín, he eventually takes over his father's book store. Carax survives, rebuilds his life and begins to write again.

More summaries and resources for teaching or studying The Shadow of the Wind.

The Shadow of the Wind from BookRags. (c)2022 BookRags, Inc. All rights reserved.