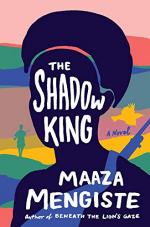 Maaza Mengiste
This Study Guide consists of approximately 42 pages of chapter summaries, quotes, character analysis, themes, and more - everything you need to sharpen your knowledge of The Shadow King.

Fucelli instructs Ettore to fill out his census paperwork. Though Ettore feels no tie to his Jewish heritage, he does not know how to die it on paper. He tells Fucelli he knows little about his father. Fucelli sends him to a bar. Ettore sleeps with a prostitute.

Fucelli copies and distributes the photos of Aster and Hirut to his men. They laugh and jeer. Eventually, Kidane receives copies. He is troubled by the images. His wife looks as afraid as she did on their wedding night. He and his men devise a plan to conquer Fucelli. They stay hidden in their caves, sending spies out to locate Fucelli.

More summaries and resources for teaching or studying The Shadow King.