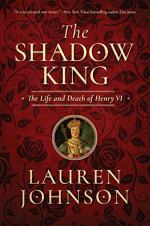 The Shadow King: The Life and Death of Henry VI Summary & Study Guide

The Shadow King: The Life and Death of Henry VI Summary & Study Guide includes comprehensive information and analysis to help you understand the book. This study guide contains the following sections:

This detailed literature summary also contains Topics for Discussion on The Shadow King: The Life and Death of Henry VI by Johnson, Lauren.

The following version of the book was used to create this study guide: Johnson, Lauren. The Shadow King: The Life and Death of Henry VI. Pegasus Books, 2019. Amazon Kindle Ebook.

Henry VI becomes King of England before his first birthday after the death of his father, Henry V. Henry V's military efforts abroad mean that his son is also king of France; however, his French crown is contested and the country is rife with civil war. To rule during his minority, a regency council is established. Henry's uncles Gloucester and Bedford both play significant roles in his early minority and fight on Henry's behalf to maintain his French crown. Still a child, Henry is anointed king of both England and France. However, English military efforts in France are largely unsuccessful. Henry loses a lot of his French territory and his rule there is threatened.

Upon reaching his majority, Henry is immediately proven to be a pious and bookish ruler. He is incredibly generous and unwisely forgiving toward his nobles when they cross him. He is also committed to pursuing peace with France. Negotiations for peace in France so back and forth for years. Meanwhile, Henry is impoverishing the crown with his far too generous patronage. Eventually, a degree of peace with France is established, though Henry has had to sacrifice much of his French territory, and Henry is married to the Frenchwoman Margaret of Anjou.

Henry's rule in England begins to falter as his subjects are unhappy with his expenditures. Furthermore, many citizens have serious dislike for Henry's advisors and counselors. Rebellion foments, particularly in Kent where citizens rise up to remove members of Henry's entourage, though their rebellion is eventually put down. Without a direct heir, and considering the fact that Henry's grandfather usurped the throne, others with arguably better claims to the throne begin to emerge. Richard Duke of York returns from abroad and begins to foment a rebellion of his own. Initially, he and his allies claim not to want to depose Henry but to remove his bad advisors. Unrest and civil war brews.

In 1453, Margaret finally falls pregnant. However, the same year, Henry suffers a serious bout of mental illness. He sinks into a catatonia in which he is almost completely incapacitated. Richard duke of York is appointed protector of the realm until Henry recovers early the following year. Meanwhile, his son, Prince Edward is born. In the following years, York's ambition and desire for power grows. Many battles are fought between the Yorkists and Henry's dynasty, the Lancastrians. Despite his military successes through which he is able to capture Henry, York fails to win enough support for his own claim to the throne. A compromise is reached in which Henry disinherits his own son, and names York and York's descendants and his heirs.

Determined not to give up on the Lancastrian cause, Margaret of Anjou raises her own army and frees her husband. York is killed in battle but his son, Edward, takes up the Yorkist cause. Eventually, Edward of York succeeds in seizing the throne and is crowned King Edward IV. In exile, Margaret does not give up. Eventually, King Edward's rule also causes disgruntlement among the nobles, whose loyalties shift. With the defection of previously loyal Yorkists to the Lancastrian cause, King Edward is deposed and Henry VI is restored. However, Edward soon raises both money and a military force and reclaims the throne once again. Henry's restoration only lasts six months. Margaret continues to fight for her family, but her son, Prince Edward is killed in battle. Margaret and Henry are now both imprisoned and there is no direct heir for the Lancastrian dynasty. Determined not to lose the crown again, King Edward orders the death of Henry VI, who dies in imprisonment. Margaret lives under house arrest for several years until she is exiled back to France where she dies.

After his death, a religious cult develops around the pious Henry VI. He is said to have performed miracles and his tomb becomes a pilgrimage site. Many advocate for his canonization but they are ultimately unsuccessful. Henry VI's most enduring legacy is the educational institutions he founded: Eton College and King's College, Cambridge.

The Shadow King: The Life and Death of Henry VI from BookRags. (c)2022 BookRags, Inc. All rights reserved.