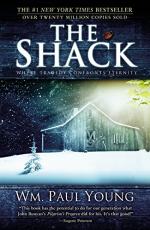 William P. Young
This Study Guide consists of approximately 72 pages of chapter summaries, quotes, character analysis, themes, and more - everything you need to sharpen your knowledge of The Shack.

This detailed literature summary also contains Quotes and a Free Quiz on The Shack: Where Tragedy Confronts Eternity by William P. Young.

The following version of the novel was used to create this study guide: Young, William Paul. The Shack: Where Tragedy Meets Eternity. Windblown Media, June 20, 2008. Kindle.

For centuries man has grappled with the paradox presented by God’s love, his forgiveness and his position within the Holy Trinity. In his novel The Shack: Where Tragedy Meets Eternity, William Paul Young attempts to shed some light on these paradoxes as he addresses the main theme of the novel: Where is God when tragedy strikes? Other themes in the novel include the curse of the human desire for independence, God’s respect for human free will, the danger of judgement and the ways in which religion disagrees with God’s true nature.

Mack Phillips began a life changing journey when he received a note in his mailbox from Papa. The note angered Mack because it invited him for a meeting at the shack, the place where Mack’s daughter had been brutally killed three and a half years prior. Despite his anger, Mack is also intrigued by the note because the signature “Papa” is the same name that his wife, Nan, uses to refer to God.

Mack had never had a close relationship with God. His alcoholic father was an elder in the church the family attended but it did not keep his father from beating his mother when he was drunk. It also did not keep Mack’s father from tying Mack to a tree and beating him off and on for two days after Mack told someone in the church about his father’s violent tendencies. Missy’s abduction and murder only caused more separation in the relationship between Mack and God.

Unable to overcome his curiosity about the letter, Mack went to the shack on the appointed weekend. He was surprised when he did discover God there. He was even more surprised to discover God was a black woman. Papa, as she called herself told Mack the whole weekend would be about breaking down preconceived notions that Mack had about God and religion. The way God might appear if he were to have a gender and human form was the first of these preconceived notions that God intended to destroy.

Throughout the weekend, Mack spent time with Papa, Jesus, and Sarayu, the Holy Spirit, learning about the love of God and how humans had strayed so far from the plans that God had for them. They talked about God’s role in tragedy, how he was with Missy during her entire ordeal with the serial killer and how Mack needed for his own spiritual health to forgive the man who had killed Missy.

Mack learned that Missy was well in heaven and that she did not blame Mack for what had happened. Papa told Mack that Missy had even forgiven the man who hurt her so badly. During the weekend, Mack was even given the chance to reunite with his father and tell his father that he forgave him. On the last day of their weekend together Papa led Mack down a trail into the forest and showed him where Missy’s body was buried. They took the body back to the shack where they buried it.

Later that day as Mack was driving home, he was hit by a drunk driver and severely injured. He was unconscious several days and did not remember about his time with God until Willie, the only friend he had told about what he was doing, reminded Mack about the note. Willie wanted to know if Mack had really met with God and was surprised by how emotional Mack got when he posed the question. Even though Willie wanted to believe Mack’s story was true, it was Nan who believed her husband without reservation after he told her the entire story of his encounter.

After Mack recovered from his injuries, he, Nan, Willie and the police officer who helped in the investigation surrounding Missy’s death returned to the cabin and Mack showed them were the killer had left Missy’s body. Forensic specialists were able to glean enough evidence from the cave that they not only arrested the killer but also found the bodies of the other girls he had killed. Just as Papa had promised Mack he could work great endings out of tragedies, Papa helped Mack provide closure for all of the families touched by the killer.

More summaries and resources for teaching or studying The Shack: Where Tragedy Confronts Eternity.