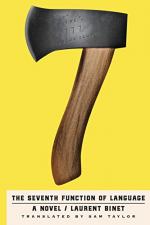 Laurent Binet
This Study Guide consists of approximately 32 pages of chapter summaries, quotes, character analysis, themes, and more - everything you need to sharpen your knowledge of The Seventh Function of Language.

The Seventh Function of Language Summary & Study Guide includes comprehensive information and analysis to help you understand the book. This study guide contains the following sections:

This detailed literature summary also contains Quotes and a Free Quiz on The Seventh Function of Language by Laurent Binet.

The following version of this book was used to create the guide: Binet, Laurent. Translated by Sam Taylor. The Seventh Function of Language. Picador, 2017.

Binet's novel is broken up into five parts and an epilogue, each corresponding to the geographical region in which it takes place. The novel is narrated in a near-omniscient manner, where the reader can sometimes glimpse the thoughts of the characters, but an anachronistic narrative "I" appears occasionally to foreground the novel's artifice and cast doubt on the reliability of the author.

The novel opens in Paris, in 1980, with the critic Roland Barthes getting run over by a van after meeting with socialist politician Francois Mitterand. Police investigator Jacques Bayard is sent to investigate the incident and to see if he can uncover any damaging information about Mitterand. He finds out that Barthes had a valuable document on him that was stolen as he lay prone in the street, and so sets out to investigate. Bayard begins by interviewing Michel Foucault, who is not cooperative, and then decides that he needs to understand semiology to continue the case. With this in mind, he goes to Vincennes and finds a young lecturer named Simon Herzog, who he requisitions to work with him as a sort of interpreter. The two search Barthes's apartment and find that he was reading Russian linguist Roman Jakobson, and are then tipped off to find a gigolo named Hamed who was close to Barthes. The whole time they are being followed by two cars: a black DS and a blue Fuego. While Julia Kristeva, Philippe Sollers, and Bernard-Henri Lévy visit Barthes in the hospital, there is another attempt on his life and he is found on the floor, but a nurse saves him. Shortly afterwards, someone sneaks into his room and suffocates him with a pillow.

Simon and Bayard meet with conservative president Giscard, who demands that they recover the stolen document, while advisors from the Socialist Party discuss how to spin Mitterand's image. Suddenly, the novel brims with action. Hamed's house is ransacked, and another gigolo named Saïd is murdered for a flyer he had in his pocket. Hamed tells Bayard and Simon that he memorized and burnt Barthes text on the Seventh Function of Language, but will not recite it for them. As Simon drives Hamed home they are attacked by two men in the black DS, who we learn are Bulgarian. Hamed defends himself and kills one assailant before being stabbed by a poison umbrella, and the other is about to kill Simon when two Japanese men from the blue Fuego step in to save him. Hamed's last word is "echo," which we come to find is a reference to Italian author Umberto Eco. There is another chase scene and death involving a man who stole the text from Barthes's apartment when Bayard and Simon go to look for it, and there is an explanation of Roman Jakobson's functions of language. The novel shifts perspectives rapidly and the reader is placed in presidential cabinet meetings, high society parties with philosophers like Sollers, Kristeva, Althusser, and Lacan, meetings between a Bulgarian intelligence agent and the KGB, and uncontextualized letters and monologues. While investigating a series of people who have missing fingers, Simon and Bayard discover the Logos Club, a secret society where people engage in rhetorical debates, and the loser has their finger chopped off, and they attend a session.

In Part 2, Simon and Bayard go to Bologna, Italy, to seek out Umberto Eco. The political atmosphere in the city is tense, and they witness members of the Red Brigades shoot someone. Simon meets a young woman named Bianca, and they find Eco, who explains performative language, the relevance of American linguists Austin and Searle, and the details of the Logos Club to them. They all go to a session of the Logos Club, and watch film director Michelangelo Antonioni lose a finger, after which Simon and Bianca have sex in the empty amphitheater. The next morning Simon, Bianca, and Bayard meet Eco in the train station, and Simon is lured outside by a surprise appearance of Anastasia, Barthes nurse in Paris who is also a Russian agent, just before a bomb goes off, destroying the train station and killing many people.

Part 3 begins with Althusser, who had been given a copy of the document to hide but then lost it, strangling and killing his wife. It is revealed that Kristeva killed Barthes and works with the Bulgarians. Kristeva, Foucault, and Slimane, a gigolo friend of Hamed's, are going to Cornell University for a linguistics conference, which Simon and Bayard plan to attend as well so they can talk to Searle. The conference is stacked with many big names of '80s philosophy, and there are many scenes showing the different camps and dramas between continental and analytic philosophy, particularly between Searle and Derrida. It seems that Slimane has, and is using, The Seventh Function of Language, and he is going around trying to sell it to the philosophers. Simon becomes increasingly distressed over the idea that he is inside a novel. There is a crazy party at the end of the conference. Slimane leaves and meets Derrida at a graveyard to sell him a cassette with the Seventh Function of Language on it, and Searle releases two attack dogs which kill Derrida. Jakobson comes out of the bushes and destroys the tape, and Slimane disappears. Searle commits suicide, and at Derrida's funeral, Anastasia reappears to tell Simon and Bayard that there is a big Logos Club event in Venice where someone is challenging the Gran Protagorus, the leader of the Logos Club, it has to be the person with the document, but only high level debaters can attend. Simon works to climb the ranks so he can attend, and is seen as a prodigy.

In Venice, Simon wins a debate against a powerful Venetian mafioso. It turns out it is Sollers who challenged the Gran Protagorus, who happens to be Eco. Sollers makes a fool of himself and the penalty for losing is that they cut off his balls. Simon is abducted by his previous opponent, who cuts off his hand. The narrative leaps shortly into the future. Simon and Bayard are back in Paris, and Mitterand wins the election using the seventh function of language. The document Sollers had was a fake written by Derrida to replace the original which Mitterand's people had stolen. Slimane lives in the U.S., where he plans to use the seventh function to help Obama. Simon is high up in the Logos Club. The novel ends in Naples, where Simon reconnects with Bianca and has members of the Red Brigades abduct the man who cut his hand off. Mafia assassins come to save the mafioso, but Simon, using rhetoric, convinces them to spare him and kill their boss.

More summaries and resources for teaching or studying The Seventh Function of Language.

The Seventh Function of Language from BookRags. (c)2022 BookRags, Inc. All rights reserved.