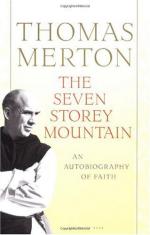 Thomas Merton
This Study Guide consists of approximately 29 pages of chapter summaries, quotes, character analysis, themes, and more - everything you need to sharpen your knowledge of The Seven Storey Mountain.

This detailed literature summary also contains Topics for Discussion and a Free Quiz on The Seven Storey Mountain by Thomas Merton.

The Seven Storey Mountain is well-described by the book's subtitle: An autobiography of faith. It is the story of Thomas James Merton's life from his birth in 1915 until his vow-taking at a Trappist monastery in 1944. The essence of Seven Storey is Merton's slow progress of philosophy and allegiance, in stages, from narcissism to communism to Catholicism to monasticism.

Thomas Merton was born January 31, 1915 in Prades, Western France. His parents were artists and endeavored to raise him without entanglements of wealth and possessions in order to live an independent, free, and expressive journey. Merton's mother died in 1921 of stomach cancer. Merton's father, Owen Merton, has a much larger influence on the life in question. In fact, he is probably the most important and best-known character in the story other than the author.

Merton and his father moved to St. Antonin, France in 1925 and lived there for a number of years. In 1929, Merton entered Oakham, a British preparatory school. That year, also, it was discovered that his father had a malignant brain tumor. His father died in 1930. That event, coupled with a memorable coming-of-age talk with Pop, started Merton on a narcissistic slide.

After Oakham, Merton was admitted to Cambridge. In the summer before entering Cambridge, Merton traveled to Rome where frescoes in ancient cathedrals formed the impetus for his first step toward interest in religion.

Merton entered Columbia University where whatever religious sentiment he had was drowned or converted by communism, which seemed an increasingly popular philosophy.

During his time at Columbia, he attended his first mass at the Church of Corpus Christi in New York. After that experience, Merton's desire for religious things seemed set on an accelerated course. He wanted to be baptized and to enter "into the supernatural life of the Church". On November 16, 1939, Merton was baptized and received his first communion from Father Moore at Corpus Christi. Then he started to entertain thoughts of joining the priesthood.

By now, Merton was taking communion daily and God had become the central focus of his thoughts. He applied to the novitiate at the monastery of St. Francis of Assisi in New York and was eagerly awaiting his chance to enter the cloister when, he writes, "I suddenly remembered who I was, who I had been". His inward life had changed so much that he applied to the monastery almost as a new man and had neglected to tell the abbot, Father Edmund, about the sins of his past. When he did so, Father Edmund suggested that he write to the Provincial, where his application was being considered, and withdraw his application.

But Merton couldn't rest with his decision and eventually he feared that his inaction was putting him forever out of reach of his dream. He spoke to a priest he knew who encouraged him to reapply to the priesthood, this time at Gethsemani. The brothers there accepted his application and he went back to Kentucky during the Christmas season as a postulant. A life of simplicity, prayer and contemplation is what he was meant for.

More summaries and resources for teaching or studying The Seven Storey Mountain.