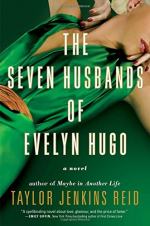 Taylor Jenkins Reid
This Study Guide consists of approximately 59 pages of chapter summaries, quotes, character analysis, themes, and more - everything you need to sharpen your knowledge of The Seven Husbands of Evelyn Hugo.

This detailed literature summary also contains Quotes and a Free Quiz on The Seven Husbands of Evelyn Hugo by Taylor Jenkins Reid.

The following version of this book was used to create this study guide: Reid, Taylor Jenkins. The Seven Husbands of Evelyn Hugo. New York: Atria Books, 2017.”

Monique Grant, a 35-year-old writer for Vivant magazine is informed by her editor that she has been chosen to interview a reclusive actress, Evelyn Hugo, 79, about her decision to auction off her dresses in order to make a donation to a breast cancer charity. Monique is a junior writer, and unsure why she has been chosen by Hugo, but she goes to the actress's Upper East Side apartment to meet her. Once there, Evelyn informs Monique that she actually wishes her to write her biography, because she has decided to finally tell the truth about certain aspects of her private life.

Evelyn Hugo launches into her life story. At 14, living with her abusive father in Hell's Kitchen, Evelyn marries her first husband, Ernie Diaz, in exchange for a ride to Hollywood. Once there, she is discovered by Harry Cameron, a young producer working for Sunset Studios. Evelyn seduces an executive at Sunset in order to get the part of Jo in an adaptation of Little Women. The studio wishes her to be seen publicly dating famous men, so she divorces Ernie Diaz. She falls for fellow actor Don Adler on their first date, and they marry. Don quickly becomes abusive, however, and beats her when she does not do obey his whims.

The production of Little Women goes ahead. Evelyn, now 21, stars opposite Celia St. James, 19. Evelyn is initially jealous of Celia's talent, but the two quickly form a bond. At a party after the opening of the film, a friend tells Evelyn that Celia is a lesbian. Evelyn confronts Celia in private to ask if this is true. Celia asks if she will no longer be her friend if it is, and Evelyn kisses her. At this same party, Don Adler has sex with another woman. Evelyn divorces Don and moves in with Celia.

Evelyn is ostracized in Hollywood because the industry is loyal to Don. She goes to Paris and stars in a racy film by French director Max Girard that reignites her career. A tabloid runs an article suggesting that Evelyn and Celia are lesbians, and Evelyn concocts a plan to hide their relationship. She will get Mick Riva, a singer who has made his crush on Evelyn publicly known, to take her to Las Vegas and marry her, then get the marriage annulled in the morning. This, she believes, will distract the press. The plan works perfectly except Evelyn, who had to sleep with Mick in order to get him to marry her, is pregnant. Evelyn gets an abortion, but Celia is furious and leaves her. They do not speak for five years.

After starring in an adaptation of Anna Karenina, Evelyn enters into a sham marriage with her co-star, Rex North, in order to gain publicity for the film. Shortly thereafter, Rex impregnates his girlfriend and Evelyn spins another story, that she had also been cheating with Harry Cameron (who in reality is a closeted gay man). Evelyn and Celia (who has entered into her own sham marriage with an NFL quarterback named John Braverman, also gay) reunite. Evelyn marries Harry, and Celia and John move in with them, two homosexual couples passing as two heterosexual couples. Life is idyllic for Evelyn during this period, and when Harry suggests they have a child, Evelyn, now 36, agrees. They have a baby girl and name her Connor.

Evelyn stars in another Max Girard movie, and the director asks her to film an explicit sex scene. She acquiesces. Evelyn realizes afterwards that she should have discussed this with Celia first, so she goes to Celia to ask permission. Celia asks her not to film the scene, and Evelyn must admit she already did. Celia leaves Evelyn and they are once again separated for several years. In the interim, John Braverman dies, and Harry is crushed. He begins drinking excessively. Max Girard proposes to Evelyn. She marries him, but immediately discovers he does not really love her, only the status and fame she brings to the relationship. She stays married to him for six years, then leaves to reunite with Celia. Celia suggests they move to Spain to avoid public scrutiny. She also tells Evelyn that she has emphysema and is not expected to live another 10 years. Evelyn asks Harry to go with them, and he suggests Celia marry the new man he has been seeing. Before this plan can move forward, Evelyn arrives at Harry's house one day to discover a car accident out front. Harry is unconscious in the driver's seat, the man in the passenger seat (Harry's lover) is dead. Evelyn convinces her taxi driver to help her get Harry to the hospital so he is not charged with a crime. Harry dies.

Evelyn, Celia, and Connor move to Spain, along with Celia's brother Robert, whom Evelyn agrees to marry to disguise her relationship with Celia. Celia passes away six years later. Robert dies a few years after that, and then Connor is diagnosed with breast cancer and she also dies. Evelyn explains that she has also been diagnosed with breast cancer, and she wants people to know the truth about her life, that her family was always her central priority. She did some terrible things, but she did them for love.

Monique asks Evelyn what she means, and Evelyn responds that Monique's father was the passenger in Harry's car. Evelyn allowed the authorities to believe that James had been driving drunk by moving Harry from the scene. Monique is furious, and she storms out, but it occurs to her that Evelyn has told her all of this because she intends to end her life. She considers calling 911, but decides that it should be Evelyn's choice if she wants to die. Monique realizes that she will forgive Evelyn one day. Evelyn's death is reported as an accidental overdose, and Monique publishes the introduction for her biography in Vivant, finally disclosing that the true love of Evelyn's life was not one of her seven husbands.

More summaries and resources for teaching or studying The Seven Husbands of Evelyn Hugo.