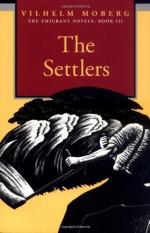 Vilhelm Moberg
This Study Guide consists of approximately 35 pages of chapter summaries, quotes, character analysis, themes, and more - everything you need to sharpen your knowledge of The Settlers.

The Settlers Summary & Study Guide includes comprehensive information and analysis to help you understand the book. This study guide contains the following sections:

This detailed literature summary also contains Topics for Discussion and a Free Quiz on The Settlers by Vilhelm Moberg.

Karl Oskar Nilsson is in the woods near his homestead in the Montana Territory when he hears the sound of an ax. He knows this means that they must have a neighbor settling on a nearby claim and goes to investigate. He finds that it is a man named Petrus Olausson who says his wife and their children will join him as soon as he has a house built. Petrus was exiled from Sweden for his religious beliefs. He is pushy, telling Karl all the things he should be doing differently, but Karl and Kristina are still glad to have neighbors. Karl and Kristina have been settled for several years along with their children. Karl works hard at their farming enterprise and over the early years he has a cow for milk, pigs for meat and the family grows almost everything else they need. Kristina cards wool for spinning and weaving from their sheep and flax.

Karl's younger brother Robert had moved to America with the family but Robert and his best friend, Arvid, leave the farm to seek their fortunes in the gold fields of California. Robert and Arvid leave without realizing that the trip will take many months. They are stalled halfway and have to spend a winter waiting for the opportunity to travel on to California. They are hired by a man who needs someone to tend his mules on the trip. They have not made it far before Arvid dies from drinking poison water. Robert's desire for the trip is ended by Arvid's death. He remains with his employer while the man dies of yellow fever and the man leaves Robert his possessions - the mules and several thousand dollars. Robert finds a Swede he'd met on the trip to America and that man offers to invest Robert's money. When Robert himself falls ill, the man returns his money in bills. Robert returns to Minnesota where he gives the money to Karl and Kristina. When Karl tries to deposit the money at the bank, he discovers that the money is worthless. He confronts Robert without realizing that Robert has also been cheated. Robert is angry and the brothers argue, ending with Karl striking Robert. Robert tells Karl that he deserved the blow, that there is nothing to forgive, but that it is time for him to leave. He leaves the house and walks for most of the day, but then sits down and dies in the forest. He is found days later and becomes the first person buried in the settlement's new cemetery.

Life goes on for Karl and Kristina. She worries about the possibility of a new pregnancy, knowing that she is not as strong as she was in her youth. Karl is also slowing down and admits that he doesn't have the energy he had as a young man newly arrived in America. Both continue to work hard and Kristina battles homesickness as if it were a tangible disease. Kristina eventually miscarries a child in her sixth month and after that, she comes to realize that she has to learn to accept her situation in life, namely that she lives in America and that she will never return to Sweden. Her attitude goes through a change and she tells Karl that she has come to realize their moving to Minnesota was predestined.

More summaries and resources for teaching or studying The Settlers.

The Settlers from BookRags. (c)2022 BookRags, Inc. All rights reserved.