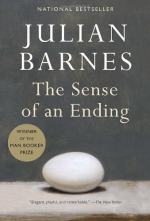 The Sense of an Ending Summary & Study Guide

Julian Barnes
This Study Guide consists of approximately 47 pages of chapter summaries, quotes, character analysis, themes, and more - everything you need to sharpen your knowledge of The Sense of an Ending.

The Sense of an Ending Summary & Study Guide Description

The Sense of an Ending Summary & Study Guide includes comprehensive information and analysis to help you understand the book. This study guide contains the following sections:

This detailed literature summary also contains Quotes and a Free Quiz on The Sense of an Ending by Julian Barnes.

The novel begins with a series of images, as the central character lists memories from his youth that have stuck with him. These details are not at all organized, but carry a common theme of water, as he describes steam, a drain, a river and bathwater. The author begins his tale in school, when he was in high school. He is British, and so the style of education and such is also British. He opens by describing his friends, and the addition of their newest member to the group, Adrian Finn, a decidedly intelligent boy whose tact for banter with Professor Hunt makes the boys eager to add him to their numbers. The narrator introduces himself, both to Adrian and to the reader as Tony Webster. Adrian assimilated to the group rather easily, although his attitude is a polar opposite to the skeptic nature of the other three. They all hate their parents, except Adrian although his parent's separated when he was younger. The others assume that social constructs are inherently flawed, but Adrian believes in living by principles.

During their time at school a student, Robson, dies from suicide. Rumors circle around the school that he committed this act after his girlfriend became pregnant. The friends discuss the philosophical meaning of suicide, coming to the conclusion that Robson did not die for the right reasons. As a group these boys feared living life as a non-epic, living life simply as an ordinary individual, someone no book would ever be about. They are somewhat disappointed by Adrian's lack of desire to pursue his life based on these literary ideals, they believe that he has been given the gift of a broken home, and he must pursue it.

The boys graduate and separate. Adrian earned a full ride to Cambridge. Tony got a girlfriend, through no effort or skill of his own, simply through his existence. Her name was Veronica Ford. She was a diminutive girl who disliked his taste in music, but appreciated his taste in books. He assumed she was a virgin, but had no information to back up that claim. After some time she took him to meet her family. Her father was large and a little crude, her brother typical and her mother aloof. He had an awkward conversation with Mrs. Ford, where she warned him about Veronica, but quite vaguely.

Tony returned to Bristol, and a week or so later Veronica came to London to meet Tony's friends, Adrian included. She had an instant connection with Adrian, something that Tony noticed and resented. They discussed their relationship a year or so later, and broke up. Quickly after the breakup the two had sex, after which Tony decided not to get back together with her, making it almost rape in the mind of Veronica. Strangely enough, Tony received a letter from Veronica's mother more or less congratulating him for ending the relationship. He later received a latter from Adrian requesting his permission to date Veronica, to which Tony reacted strongly. He decided to respond positively at first. He then wrote a new response letter, harsh and unrelenting, speaking of Veronica being damaged, but without any real reasoning behind this accusation. He never heard back from either of them.

Tony graduated from his university and went backpacking in the U.S. where he met Annie and spent three months with her, marveling at the ease of their relationship. As soon as he returned from the states he was informed that Adrian had committed suicide, with the reason that he had rejected the gift of life. Tony found out from Alex that Adrian had been happy and in love, presumably with Veronica. Tony decided to admire and respect Adrian's reason as philosophically and logically sound. He met with his friends a year later on the anniversary of Adrian's death, but it was clear that remembering Adrian would not be enough to keep the group together. He met Margaret, got married, had a daughter and got divorced.

It is now the present tense of the book and Tony has finished, more or less, with his reminiscing and begins to speak about his current life as a retired hospital library assistant. He receives a letter from the estate of Mrs. Sarah Ford, Veronica's mother who had passed away. He is left 500 pounds and two documents, the first a letter somewhat explaining the unwarranted gift. The second document is still with Veronica Ford. He then finds out that the second document is Adrian's diary. He goes to talk to his own lawyer to see if there is any legal way to force Veronica to return the diary, but of course there really is not. He does receive the email of Jack, Veronica's brother and attempts to use Jack to get to her. He receives Veronica's email from Jack and writes to her, requesting the diary and an explanation. Veronica responds with the phrase "Blood Money", which only confuses Tony even more. They email sparingly until Veronica sends him one page of a diary in which Adrian is trying to turn relationships into a mathematical formula, with variables that Tony cannot understand. They continue to email until Veronica sets up a meeting.

They talk, or more spar, until Veronica gives him an envelope and leaves. A day an a half later he reads the letter and finds out that it contains the harsh letter than he had written to Adrian and Veronica. Tony realizes how bad this letter really had been in the past. He begins to blame himself for Adrian's suicide. He emails Veronica about her family, and learns that her father died from his drinking and cancer, and her mother started smoking and losing her memory. He emails her again and they set up another meeting. Tony speaks about his life story since their breakup, and after she hears it she leaves.

They set up a third meeting, this time at a subway station. They drive, and Tony tries to converse but can't as Veronica deigns not to respond. She shows him a man, clearly mentally behind who calls Veronica by one of her middle names, Mary. Tony tries to find the man on his own and succeeds, but the man reacts negatively. Tony believes he has come to the correct conclusion that the man is Adrian and Veronica's son. This signifies that Adrian's suicide had not been the perfect logical one, but rather unremarkable like that of Robson.

Tony emails Veronica to apologize, but receives a response that he has again misunderstood the situation. He returns to the pub where the man he believes to be Veronica's son spends his Friday nights and talks with his handler, who informs him that his name is Adrian, and that he is Veronica's brother. He infers from this that Adrian is indeed the father, but Sarah Ford is the mother, and his mental illness was caused by her advanced age at the time of the pregnancy. The variables of the mathematical formula also now make sense. He closes the story by stating that life is full of responsibility, but even more unrest.

More summaries and resources for teaching or studying The Sense of an Ending.

The Sense of an Ending from BookRags. (c)2022 BookRags, Inc. All rights reserved.