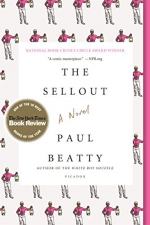 Plot Summary
+Chapters Summary and Analysis
Prologue – The Shit You Shovel: Chapter 5
The Shit You Shovel, Chapter 6 – Exact Change, or Zen and the Art of Bus Riding and Relationship Repair, Chapter 10
City Lites: An Interlude – Too Many Mexicans, Chapter 15
Too Many Mexicans, Chapter 16 – Apples and Oranges, Chapter 20
Apples and Oranges, Chapter 21 – Epilogue
Free Quiz
Characters
Symbols and Symbolism
Settings
Themes and Motifs
Styles
Quotes
Order our The Sellout Study Guide

Paul Beatty
This Study Guide consists of approximately 41 pages of chapter summaries, quotes, character analysis, themes, and more - everything you need to sharpen your knowledge of The Sellout.

The Sellout Summary & Study Guide includes comprehensive information and analysis to help you understand the book. This study guide contains the following sections:

This detailed literature summary also contains Quotes and a Free Quiz on The Sellout by Paul Beatty.

The Sellout, by Paul Beatty, is an African-American novel of satire on race relations in the United States. The book revolves around the unnamed, black narrator who is coming before the Supreme Court on charges of slave holding and re-instituting segregation. The narrator recounts to the Supreme Court the events that brought him to the present time.

The narrator, a resident of Dickens, California, was born to a single father who was a sociology professor. The father saw the narrator as a social experiment rather than a son. For example, he would line the narrator’s crib with toy police cars and Richard Nixon campaign buttons while firing a gun and shouting “Nigger, go back to Africa!” Since the narrator’s father saw racism all around him, he decided to home school his son rather than have him attend white-run public schools. Despite his father’s arguments about racism, the narrator believed that there was no real widespread racism anymore. He also believed that not taking advantage of opportunity was the only thing holding back black people.The narrator himself had only experienced direct racism once. At a white-run gas station, the narrator had asked to use the restroom, but he was told he had to purchase something first. The narrator decided to purchase a Coke. He was charged the “black” price of $1.50 rather than the regular price of seven cents. Instead of giving in, the narrator ran down the block to use the bathroom.

Years later, the narrator’s father is shot attempting to run from the police after shouting at them during a bust on the sidewalk. The narrator came to inherit his father’s house and two acres of land, which he continued to farm as his father did. The narrator also came to take his father’s place in many ways, for his father was sought by members of the surrounding community of Dickens as the “Nigger Whisperer”, a man who could talk sense into people and help them make better choices. The narrator disliked this particular role, but filled it. The narrator was later stunned when, to boost property values in the area, the City of Dickens was eliminated from the map. The narrator vowed to bring the City of Dickens back. He decided to announce this plan at the community meetings of his father’s old intellectual circle, the Dum Dum Donuts, headed by the fiery Foy Cheshire, who, like the narrator’s father, saw racism everywhere. However, the narrator irked Foy by challenging Foy’s belief that classic works of literature should have the word “nigger” removed from them, saying that sheltering kids from cruelty is not the right way to go. For this, Foy labeled the narrator a “Sellout.”

At the same time, the narrator begins to reconnect with an old college flame, a now-married woman named Marpessa who drives a city bus. The narrator’s neighbor, the elderly Hominy Jenkins, is also brokenhearted by the loss of the City of Dickens. Hominy, the sole surviving member of the Little Rascals, decided then that he wanted to become the slave of the narrator. The narrator could not shake Hominy’s determination, so he agreed to take Hominy on as a slave. To celebrate Hominy’s birthday, a party was set up on Marpessa’s bus where Hominy wanted to give his seat up to a white woman. The narrator affixed stickers saying the first third of the bus seats were to be given to whites and hired a white prostitute to complete the illusion. While Marpessa was enraged by the stickers, arguing they set black people back five-hundred years, she forgot to take them down. As a result, her bus became the safest in the city. Marpessa’s best friend, Charisma, the assistant principal of Chaff Middle School, believed this was because the signs reminded local blacks of how far they had come, but how far they still had to go. The narrator then suggested segregating Chaff Middle, which Charisma agreed to do. The result was to orientate black kids to learning and getting ahead.

Meanwhile, the narrator and Hominy set about bringing Dickens back by spray painting the boundaries of the place, seeking a sister city (the matching agency paired them up with Chernobyl, among others), and putting up segregation signs all over the place. When the narrator attempted to integrate white students into Chaff Middle, Foy and Charisma believed the narrator had gone way too far. Charisma blocked white students from entering the school while Foy ended up shooting the narrator. It was during this time that it was discovered that the narrator had a slave, had segregated the city, and had segregated the school. After five years of going through the legal system, the narrator’s case ended up at the Supreme Court.

Back in the present, the narrator does not know whether he will go to jail as he waits for the Supreme Court’s judgment. He is continuing to sleep with Marpessa, while Hominy has decided to free himself and now seeks to discuss reparations. The narrator attends a black comedy night nearby, at which a black comic angrily chases out the lone white couple in the audience, telling them this is “our thing.” The narrator feels bad about remaining silent, not because he wants to defend the white couple or to protest the comic, but to ask the comic what he means by “our thing.” At home, watching the weather forecast, the narrator is happy to see Dickens has been listed again. However, he is dismayed to learn that the election of Barack Obama has made Foy believe that America has paid all of its debts.

More summaries and resources for teaching or studying The Sellout.

The Sellout from BookRags. (c)2022 BookRags, Inc. All rights reserved.