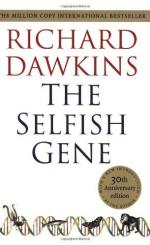 Richard Dawkins
This Study Guide consists of approximately 50 pages of chapter summaries, quotes, character analysis, themes, and more - everything you need to sharpen your knowledge of The Selfish Gene.

This detailed literature summary also contains Topics for Discussion and a Free Quiz on The Selfish Gene by Richard Dawkins.

According to the introduction to this book, "The Selfish Gene" changes the way that many scientists look at the process of natural selection. The author begins by suggesting that intelligent, thinking animals must ask questions about its origins, and that Darwin has supplied excellent answers. However, Darwin's thoughts have been misinterpreted over the years to suggest that animals work together to preserve their own species. This book will challenge that idea.

In the next chapter, Dawkins describes how the very earliest forms of life may have come to be. He says that when electrical energy combines with the sort of chemicals in early earth's seas the result is a sort of soup of the building blocks of life. If any of the molecules in this soup somehow begin to replicate—or make copies of themselves, the process of life would follow. The molecules that make the most accurate copies of themselves and which last the longest outnumber the others. When the raw material of building is used up, the molecules with protection or aggressive behaviors outnumber the others.

Next, the author uses the metaphor of a library to describe how chunks of DNA in the form of genes become instructions for building each living thing. A gene is a length of DNA protein chain instructions. Every cell in a plant or animal body contains the same instructions. These instructions originally are formed when half the instructions from a sperm and half from an egg come together to make a new creature. Some instructions are lost, others are passed down. The ones that don't get included in the instructions for building the new body are called alleles. The point is that the gene, which is made up of chromosomes of DNA, is the smallest most basic unit of life that could obey the rules of natural selection. But how can genes control the actions of living creatures and plants? The answer the author comes to is that there is no conscious control. Often an animal appears to be behaving a certain way because it has made a conscious choice, but more often it is operating according to long established rules. Like a computer playing chess, consciousness is not necessary for an animal to engage in survival behavior.

Using advanced math and computer simulated games, the author shows why the most selfish survival tactic of any individual is not to directly attack others in its group even though they compete with him for food and mates. Risks like wasting time or being injured makes an "attack when attacked" attitude safest. Dawkins reminds readers that he is talking about the genes in one animal within a species. Related individuals carry a large percentage of the same genes, and this explains many acts of kindness between family members. The author shows a mathematical way to calculate how many genes various family members might share, and this seems to support the widely observed phenomena of parental care and altruism. Why not make an infinite number of copies of oneself? Sometimes limiting family size may be for the good of the individual gene, shows Dawkins, because the grown up carrier of the gene (parent) could not succeed under conditions of stress or famine and might itself die in the process.

In the following chapter the author examines why the selfish offspring does not try to trick the parent into stealing from brothers and sisters to gain more resources and care from the parents. Again, the offspring share genes with nest mates, so brothers and sisters satisfied with "just enough for all" will survive in greater numbers than totally selfish siblings.

Parents don't share genes, but do share an investment in offspring. A real war of the sexes picture is painted by the author as he suggests that it might be better for the gene machine to breed and then selfishly leave the other partner to raise the young while it goes off to breed again. But, using game theory, the author shows why this is not a stable strategy. The slight gain of staying together and successfully raising young (even if a little time is wasted in care and courtship) trumps the negatives of abandoning the other partner to raise the offspring alone and possibly fail.

The author talks about the origin of herds and flocks. Each individual gene machine has a lesser chance of being eaten by a stalking predator if it is wrapped in a group. It will naturally crowd closer into the center of a group, which explains how herds or flocks are formed. He discusses various behaviors that appear unselfish but may be selfishly oriented, and then goes on to talk about the weird world of bees, wherein the workers do not ever breed. This he explains by the fact of their reproductive methods. Because they don't follow normal rules of sexual reproduction, the sterile female workers are more closely related to one another than a parent and child. It behooves their common genes to support the queen mother as she makes up gobs of identical twin sisters for the colony. Finally, Dawkins shows how cooperation between animals of different species might have arisen.

A curious last chapter shows how ideas might spread using the same mechanisms as natural selection. He calls ideas memes and indicates that many ideas tend to repeat (copy themselves), have longevity, and spread. The author hopes that we, as thinking beings, can move beyond unexamined ideas which may have spread in this way to think more deeply and more altruistically—even though altruism isn't natural!

More summaries and resources for teaching or studying The Selfish Gene.