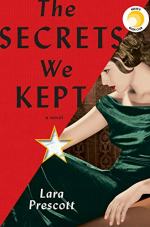 Lara Prescott
This Study Guide consists of approximately 64 pages of chapter summaries, quotes, character analysis, themes, and more - everything you need to sharpen your knowledge of The Secrets We Kept.

The Secrets We Kept Summary & Study Guide includes comprehensive information and analysis to help you understand the book. This study guide contains the following sections:

This detailed literature summary also contains Quotes and a Free Quiz on The Secrets We Kept by Lara Prescott.

The following version of this book was used to create the guide: Prescott, Lara. The Secrets We Kept. Alfred A. Knopf, 2019.

The Secrets We Kept began with a prologue from the typists in the Soviet Russia Division of the U.S. federal government. They were expected to be extensions of their typewriters, but the women were privy to much more than the men were aware of. Many women assigned a typist position had served in World War II for The Office of Strategic Services (OSS).

In the East in 1949, Olga was taken from her mother and two children in Moscow and imprisoned in the Lubyanka. Her crime was “expressing anti-Soviet opinions of a terroristic nature,” specifically in the form of supporting Boris Pasternak’s new novel, Doctor Zhivago (16). Interrogated nightly, Olga fondly remembered meeting Boris and beginning their affair four years earlier. After losing their unborn child, she was sentenced to time in the Gulag.

In the West, in Fall 1956, Irina applied as a typist for the Soviet Russia Division. Despite scoring low on the application test, Anderson called her for an interview. He divulged that her father was killed by State officials just before emigrating with her mother from Russia—not at the Gulag as she had been told—and she was offered a different job. The typing pool felt disrespected by their male superiors and formed strong bonds with each other. They observed Irina before engaging with and eventually befriending her. Meanwhile, Sally reunited with her former colleagues from the war. She acknowledged missing the thrill of working for the Agency as a secret double and agreed to work for them again.

In the East, from 1950 to 1953, Olga performed hard labor in the Gulag. She recorded her experience as a letter to her former interrogator, detailing the physical, mental, and emotional toll. She found hope in words written by Boris and those she composed, ultimately remaining faithful in his love for her. Boris, depressed without Olga yet tempted by the simplicity of his married life, decided not to continue the affair. He expressed this to Olga’s daughter and refrained from meeting Olga at her arrival as promised. Alas, he changed his mind again and continued the affair. After her release, Olga assumed the responsibility of advocating for Doctor Zhivago, especially when Boris finished the novel. She moved closer to him in the country and later sent her children to live with her mother in Moscow.

From February to fall of 1957 in Washington, D.C, Irina passed her test to become a double for the Soviet Russia Division of the Agency. Teddy insisted they cover their time spent training with a romantic relationship. Soon, the USSR successfully launched Sputnik, and the U.S. began their propaganda scheme to leak Doctor Zhivago into the USSR. Two years prior in the East, an aspiring Italian literary critic convinced Boris to give Feltrinelli, an Italian publisher, the manuscript of Doctor Zhivago. Olga met with the agent to stop publication outside of the USSR to no avail. The State required Boris to sign a telegram to Feltrinelli requesting he return the manuscript.

At the close of 1957 in the West, Irina first met and became inspired by Sally. The latter completed her training to become a secret double, and soon, they spent personal time with each other. Sally’s next assignment entailed obtaining a copy of Doctor Zhivago from Feltrinelli’s publication party in Italy, where she was discreetly handed a business card. Teddy secured a promise of the original Russian manuscript from English secret agents. Irina accepted Teddy’s marriage proposal, but soon after, she and Sally had a sexual encounter.

Sally allowed her romantic emotions to cloud her judgement during her New Year’s Eve assignment. When Henry gained the upper hand in a coat closet, he sexually assaulted her. She felt betrayed by her colleagues, who failed to defend or console her. Irina obtained and delivered the Doctor Zhivago manuscript on microfilm and then met Sally, who ended their affair. The typists witnessed Irina’s fall into depression, and not long after, Sally was fired for her sexuality. Suddenly, Irina’s mother passed away of a brain tumor. Meanwhile, in the East, Olga and her children feared for their lives. They each acknowledged that members of the State were following and watching them.

In late summer of 1958, the U.S. published Doctor Zhivago through the Netherlands. On personal time, some typists overheard Teddy and Henry’s conversation as the latter divulged Sally’s homosexuality. Irina broke off her engagement with Teddy and was accused of homosexuality by Anderson, which she successfully denied. Teddy punched Henry in the face, and the latter was swiftly sent abroad. Irina began and completed her next assignment as a nun passing out Doctor Zhivago to vetted Russians at the World Fair, or Expo 58, in Brussels.

In the fall of that year, Boris was awarded the Nobel Prize for Doctor Zhivago. Despite a warning of the consequences of accepting the Prize, he sent a telegram accepting it. Meanwhile, Sally moved to Paris as an informant for the USSR by giving up Henry’s secret assignment. In the East, Boris was cast out of the Soviet Writer’s Union and emotionally spiraled, finally sending a letter retracting his former acceptance. At the close of 1958 in the West, Sally was thanked for her information but distracted by thoughts of Irina.

At the start of 1959, Doctor Zhivago was circulating in the USSR. Olga insisted they receive payment from Feltrinelli’s publications. Boris continued to be condemned by the State, who required a letter requesting forgiveness from the Kremlin and another as an apology to the people to allow Boris’s residency there. In the summer, Irina attended the World Youth Festival in Vienna on assignment as a student to pass out more copies of Doctor Zhivago. There, she believed she saw Sally, but it was only an illusion. She acknowledged that this passion inciting visions of her first love never faded throughout her lifetime.

From 1960 to 1961, Boris died shortly after his seventieth birthday. Thousands attended his funeral to mourn and respect his written compositions. Only two and a half months later, Olga and her daughter, Ira, were imprisoned and sent to the Gulag for eight years on account of accepting foreign royalties. In the novel’s epilogue, the typists recall a more recent event; an 84-year-old woman was arrested for leaking information to the USSR during the Cold War. They read that Sally lived with a woman for the majority of her life, and they hoped it was Irina.

More summaries and resources for teaching or studying The Secrets We Kept.

The Secrets We Kept from BookRags. (c)2022 BookRags, Inc. All rights reserved.