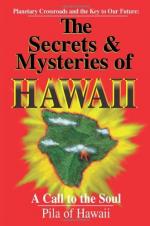 The Secrets and Mysteries of Hawaii Setting & Symbolism

The Kingdom of Le Muria

The Kingdom of Le Muria was a legendary continent known as Mu. The Hawaiian islands were said to the the tip of this continent.

The Garden is what the islands were called when the Children of God lived there. After the earthquake, the mountain tops became the Hawaiian Islands.

Tahiti is where the expelled Kahuna were sent to. It basically meant alone or away from.

Kona is a beach and city on the Big Island in Hawaii.

The Chicken Shack restaurant, run by a Viet Nam veteran called Crazy Ed, is on the Big Island at Kona.

Hawaii is the biggest island of the islands that comprise Hawaii. It is called the Big Island and associated with the color black and the spine Chakra.

Kauai is one of the Hawaiian islands known as the...