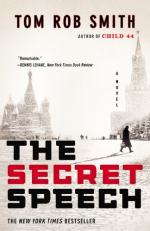 This detailed literature summary also contains Quotes and a Free Quiz on The Secret Speech by Tom Rob Smith.

NOTE: Due to the structure of the book, the summary and analysis sections for this novel are divided up according to page number. This study guide specifically refers to the 2010 Grand Central Publishing/Hatchette Book Group Trade Paperback Edition. Quotes for chapters with identical titles are also noted by page number.

“The Secret Speech” is an historical crime novel by Tom Rob Smith, which continues to follow the life and work of former MGB operative-turned-homicide investigator Leo Demidov, as well as his efforts to keep his family together, three years after the events of novel “Child 44”. Leo works the homicide department of the Ministry of the Interior in Moscow, a department which does not officially exist, as the State has officially declared that there are no serious crimes like murder in a Communist state. While Leo is successful at work, he has difficulty at home with his adopted daughters, 14-year-old Zoya and 7-year-old Elena. Both girls were orphaned in “Child 44” when one of Leo’s men killed their parents in front of them. While both girls love Leo’s wife, Raisa, Zoya is full of nothing but hate for Leo, taking every opportunity to spite him, insult him, and hurt him, including contemplating his murder.

In March, what history comes to call the “Secret Speech”, a treatise delivered by Khrushchev, the new Soviet leader and head of the Central Committee of the Communist Party, is made public. The speech, though not intended for publication, is delivered to all schools, factories, shops, groups, organizations, and so on, across the Soviet Union. The speech admits to torture, wrongful imprisonments, forced confessions, and State-sponsored murder under the regime of Stalin. The doors are thrown open for reform – and for revenge. Thousands upon thousands of people who have been wrongfully locked up for years are now returning home, and many of them want revenge against the militia, soldiers, guards, State Security agents, and politicians who wronged them. A series of revenge killings are assigned to Leo to investigate. At the same time, Zoya is kidnapped. Leo meets the kidnappers, a gang of criminals headed up by a vicious woman named Fraera, once known as Anisya – a woman who was Leo’s first arrest in 1949 as a new MGB agent. Fraera is also responsible for the murders, and will stop at nothing to have her revenge against Leo, including the staged murder of his daughter.

When Leo learns the murder was staged, he receives permission from his superior, Panin, to travel to Hungary with Raisa and Karoly, a translator, to get Zoya back and kill Fraera. Panin explains that the situation is dire. The Secret Speech has brought about too much reform too fast to the point of loss of control. Fraera, in exchange for her life, is instigating an uprising in Budapest, which the Soviet military will crush, using it as proof of the dangers of reform. The incident will also provide evidence to oppose Khrushchev’s planned military cuts and nuclear proliferation. Leo, Raisa, and Karoly arrive in Budapest during the uprising, where they learn that Zoya has fallen into the criminal gang, wanting to turn her back on her former life with Leo. Karoly, while searching for Zoya, discovers that his son, a member of Hungary’s Secret Police, has been caught by the mobs. While trying to help his son, Karoly and his son are set on fire and burned to death. Leo and Raisa find Zoya as the Soviet crackdown begins in earnest. Much of Zoya’s anger and hatred have burned out in the time she has spent seeing so much death and heartache around her. Fraera, surprisingly, lets Leo, Raisa, Zoya, and Zoya’s boyfriend, fellow gang member Malysh, go. She explains she wanted to make Leo suffer by thinking he had lost Zoya, and she has done so. She also explains that the uprising is her ultimate revenge against the Communists. She is running around with a camera, taking photos of Soviet barbarity, to distribute to the world so the world will turn against the Soviet Union. As Leo, Raisa, Zoya, and Malysh escape, Malysh is killed while taking out a Soviet tank. Leo, Raisa, and Zoya return home, where Elena is thrilled to see her older sister once more. By the end of the novel, Leo and Zoya have begun to build a real father-daughter relationship.