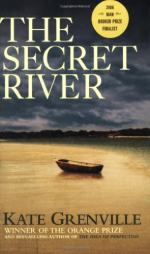 Kate Grenville
This Study Guide consists of approximately 65 pages of chapter summaries, quotes, character analysis, themes, and more - everything you need to sharpen your knowledge of The Secret River.

This detailed literature summary also contains Quotes and a Free Quiz on The Secret River by Kate Grenville.

Sent to Australia because he tried to steal from his boss in London, William Thornhill became one of the first settlers in the Australian wilderness in the novel “The Secret River” by Kate Grenville. The novel describes the conflict between the earliest settlers of the country and the natives of Australia as they clashed for ownership of the land. Themes include ownership, racism, social class and hope.

Thornhill grew up poor but dreamed of a better future. He thought he was on his way to this better future when Mr. Middleton took him on as an apprentice as a waterman. He completed his apprenticeship successfully and married Sarah “Sal” Middleton, his childhood sweetheart. His father-in-law gave Thornhill his own boat as a wedding gift. Things were going well for the new couple until both Mr. and Mrs. Middleton got sick and died. Their care used up all of the money the two had in savings. Their property, including the boat Mr. Middleton had given Thornhill, had to be sold to pay their remaining debts. As a result Thornhill had to go back to working for others and was unable to make a living for his family. He was caught stealing in an attempt to feed his family and was sentenced to death by hanging.

Thornhill received a pardon for his crime and was allowed to go to Australia to serve his sentence. After one year of service with his wife as an overseer, Thornhill earned his ticket of leave allowing him to work for whoever he wanted. He eventually partnered up with Thomas Blackwood an old friend from London who transported crops and supplies to and from the settlers along the Hawkesbury River. Thornhill fell in love with a piece of property he saw along the river during his first trip. He convinced Sal they could earn enough money to return to England if they claimed a plot of land and farmed it.

Once they were on the land in the wilderness, the Thornhills were regularly threatened by the natives who once had freely roamed the land. Although other settlers abused and even killed the natives, Thornhill just wanted to be left alone. Even though he wasn’t purposefully cruel to the natives, they came and stole most of his corn one day. After he and his workers ran them off, they returned that night and set fire to what was left.

When he was asked to assist a group of men going to ambush a camp of natives Thornhill agreed to go along and help. He knew his life would never be the same after he stooped to the level where he would help kill other human beings. After the natives were cleared from the area Thornhill and his family became successful on their land in Australia. They became the gentry they’d always dreamed of being in London. Even with his prosperity, Thornhill still used his telescope to scan the woods looking for the natives that once called that land their home.

More summaries and resources for teaching or studying The Secret River.