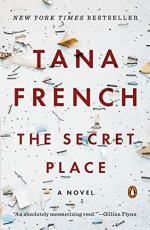 Tana French
This Study Guide consists of approximately 80 pages of chapter summaries, quotes, character analysis, themes, and more - everything you need to sharpen your knowledge of The Secret Place.

This detailed literature summary also contains Quotes and a Free Quiz on The Secret Place by Tana French.

The following version of the novel was used to create this study guide: French, Tana. The Secret Place. Penguin Books, September 2, 2014. Kindle.

In The Secret Place by Tana French (Dublin Murder Squad, Book 5), Detective Stephen Moran sees a shot at a promotion when Holly Mackey, a student from St. Kilda’s school, brings him a fresh clue in a cold case murder. Holly gives Moran a card she claims she found on a notice board at school. The card bears the words “I know who killed him” (10) and a picture of Chris Harper, a boy from Colm’s a neighboring boys school. Chris had been killed a year prior, his body found on the grounds of St. Kilda’s. The killer was never identified. As Moran and Antoinette Conway, a detective who originally worked the case, the quickly realize that in the world of teen girls, nothing is as it seems.

Moran and Conway encounter a web of rumors, lies, and blackmail when they begin questioning the eight girls — Holly, Julia Harte, Rebecca “Becca” O’Mara, Selena Wynne, Joanne Heffernan, Gemma Harding, Orla Burgess, and Alison Muldoon — who had access to the notice board when the card appeared. Holly, Julia, Rebecca, and Selena are a group of best friends in competition with Joanne, Gemma, Orla, and Alison. Joanne dated Chris in secret at one point. Later, Selena began seeing Chris. Because Selena and her friends had made a pact not to have boyfriends until they were in college, Selena broke off the relationship. Selena believed she had broken the loyalty she and her friends enjoyed and feared she would be punished.

As Moran and Conway uncover the secret relationships between the students, they also learn that Chris had given his girlfriends special phones they could use to text him. The investigation seems to focus on Holly, the daughter of another detective, when another student claims to have seen Holly disposing of Selena’s secret phone in the lost and found bin. Moran and Conway find the phone in that bin and call Holly for more questioning. This time her father, Frank Mackey, is brought in to witness the interview. Holly claims to have thrown the phone away because she was trying to protect Selena. She swears that she did not kill Chris.

In an attempt to derail the investigation, Mackey privately discourages both Moran and Conway from trusting one another. Moran and Conway are already wary of each other because it is the first time they have worked together. Moran is shocked when Conway orders him off the case, telling him to go and walk the grounds while she finishes alone. Outside, Moran realizes that the girls under investigation have been sent outside to stretch their legs before bed.

Moran first talks to Joanne and her group. They tell him that Rebecca, a member of Holly’s group of friends, is not as innocent as she seems. Gemma claims to have seen Rebecca in the groundskeepers’ shed waiting for the groundskeeper so she could buy drugs from him. Gemma does not realize she gives Moran valuable information when she tells him that she saw Rebecca sorting through the gardening tools. It had never been released publicly that Chris had been killed with a garden hoe.

Before Moran moves on to talk to Rebecca, he looks at his cell phone and sees he has a text from Conway. Conway indicates she is stalling Mackey and asks if Moran has gotten any useful information. Conway is both relieved and angry with himself that he did not trust Moran more. He replies that he has urgent information. She joins him and they interview Rebecca together. Rebecca confesses to killing Chris. She had realized something was causing a break in the friendship between the four of them. When she discovered that Selena had been dating Chris, she believed she had been called to sacrifice him to cleanse their relationship.

In the final chapter of the novel, which takes place after Chris was killed but before Moran and Conway began their investigation, Holly was concerned that Selena was still so upset by Chris’ death. Holly’s father had asked her about Selena and suggested perhaps Selena’s emotional distress was caused by mental illness. Holly tried to confront Selena, but was ordered by Julia not to bother Selena and not to try to get help for her. Holly created the card that she took to Moran hoping that someone who worked the investigation would take notice of Selena’s emotional state and get her help.

More summaries and resources for teaching or studying The Secret Place.