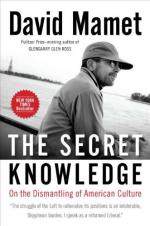 The Secret Knowledge: On the Dismantling of American Culture Summary & Study Guide

The Secret Knowledge: On the Dismantling of American Culture Summary & Study Guide Description

The Secret Knowledge: On the Dismantling of American Culture Summary & Study Guide includes comprehensive information and analysis to help you understand the book. This study guide contains the following sections:

This detailed literature summary also contains Topics for Discussion and a Free Quiz on The Secret Knowledge: On the Dismantling of American Culture by David Mamet.

David Mamet is an award-winning playwright and screenwriter. His most famous work, Glengarry Glen Ross, was both a successful play and movie. Like many Jews of his time, David was raised as a Liberal Democrat. As time passed, Mamet began to question his Liberal roots. He questioned why Liberals seemed to support the "Arab cause," and applied a moral equivalency to the conflict between the Arabs and Israelis.

After identifying most of his life with Democratic and Liberal tenets, in his later years he completely transformed into a Conservative. He felt that the policies of Conservatives more closely followed the ideas laid out in the US Constitution. Further, he came to the conclusion that if the Liberals were allowed to gain control over the government for an extended period of time, it would be the ruination of the country. After coming to his own reckoning about the political landscape, Mamet decided to put his very strong views down in writing. As he indicated, according to the Constitution, it is every citizen's right to do so.

Mamet focuses on the differences between the Conservatives, or the Right, and the Liberals, or the Left. In Mamet's view, the Left views the role of government as a body that is responsible for the protection of the weak and one that will lead everyone to the Promised Land. Liberals want to be the playground referee who will make everything fair and equal. Mamet disparages the Liberal attitudes by demonstrating how they lack substance and depend upon demagoguery and fear tactics to lure people into their camp. Voting for "hope and change" is the same as voting for a balloon—there is nothing inside except hot air.

A sizable portion of The Secret Knowledge is devoted to the administration and policies of President Barack Obama. Mamet pulls no punches in referring to President Obama as a Socialist and Marxist. He criticizes the president for everyday sending signals to the rest of the world that the United States is surrendering and is up for grabs to its opponents. He derides Obama for intervening in the US car industry. In Mamet's opinion, the US car manufacturing industry should have failed or succeeded on its own in the free market of Capitalism.

Mamet provides brief glimpses of his childhood and the discrimination he and his family faced in the US as Jews. Despite the obstacles, everyone in his family attended college and had successful lives. Their achievements were not bestowed upon them; rather, they worked hard for them. They lived the American dream which is only possible in an environment that is free and unimpeded by government intervention. Liberals want to gain power so that everyone can be proclaimed to be the same and so they can make everything "fair." Mamet points out that the fundamental problem with the Liberal view is that government cannot legislate "fairness."