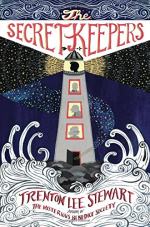 Plot Summary
+Chapters Summary and Analysis
Book 1, Walking Backwards into the Sky - Moment of Truth
Book 1, Power and Price - The Staring Stranger
Book 2, A Riddle and a Ruse - The Mystery of Jack
Book 2, The Rabbit Trap - An Unexpected Alliance
Book 3, Mrs. Genevieve's Instructions - The Race and the Chase
Book 3, Mortal Cares - The Most Mysterious Thing in the World
Free Quiz
Characters
Symbols and Symbolism
Settings
Themes and Motifs
Styles
Quotes
Order our The Secret Keepers Study Guide

Trenton Lee Stewart
This Study Guide consists of approximately 87 pages of chapter summaries, quotes, character analysis, themes, and more - everything you need to sharpen your knowledge of The Secret Keepers.

This detailed literature summary also contains Quotes and a Free Quiz on The Secret Keepers by Trenton Lee Stewart.

The Secret Keepers, by Trenton Lee Stewart is the story of an eleven-year-old boy who finds a mysterious antique watch, brings down an evil leader and finds friendship for the first time. Reuben Pedley spends his days wandering about the city of New Umbra. His mother is busy at work all day so he occupies himself by exploring the city and hiding in unusual places. One day, he makes a daring climb between two buildings and in an out of the way spot he discovers an antique watch stored in a wooden box. It is marked with the inscription, Property of P. William Light. Thinking it must be worth a fortune and knowing his mother needs help with the rent money, he visits several shops trying to find out its value. However, when the shopkeepers see the watch they suddenly turn scary and greedy and Reuben realizes he must have something truly unique. He stumbles upon the shop of an older watchmaker, Mrs. Genevieve, who is kindly and very knowledgeable. She helps Reuben to discover that the watch is indeed special and holds a secret--it can turn the owner invisible.

New Umbra is a run-down city that is controlled by an unseen leader known only as The Smoke. His right-hand man, the Counselor, and groups of men known as the Directions, do The Smoke's bidding. Everyone lives in fear of The Smoke, even the police who are expected to look the other way when the Directions extort money from local shopkeepers. Soon Reuben finds that the Directions are looking for him and his watch. Realizing that he needs to learn more about his mysterious watch, he researches P. William Light and discovers that it is a lighthouse, fifty miles up the coast. He lies to his mother about a weekend sleepover trip and heads north.

At the lighthouse, Reuben meets young Penny Meyer, a red-headed girl his own age. She, like all the other Meyers family members for generations has been waiting for someone to come to the lighthouse to return some special item as part of a secret legacy left to them by their great-aunt Penelope. Reuben hears the tale of Penelope’s fight against evil and figures out that she had once owned his watch and hidden it to keep it safe. After reading a letter written by Penelope long ago, he discovers that there is a second watch and realizes that The Smoke has it in his possession. He also learns that The Smoke wants to own both watches because he believes in an old legend that says the owner of both watches will become immortal. Believing that no person should have such ultimate power, let alone an evil man, Reuben and Penny set out to find and destroy the twin watch, thereby fulfilling Penelope’s mission of long ago.

Accompanied by Penny’s older brother Jack, the new friends head back to the city and make plans to find The Smoke. They head to the Counselor’s mansion and after some clever detective work and snooping through the house, learn that the Counselor and The Smoke are the same person. The friends plan a second visit to steal the watch, but are caught in the act by The Smoke. Working around trap doors in the floors, climbing out of a basement dungeon and avoiding getting hit by an invisible man with a club are all part of the encounter that ensues. Reuben ends the chase by letting go of his own watch and dropping it to the floor. In an attempt to save the watch, The Smoke dives to the floor and Reuben triggers one of the trap doors, sending The Smoke to the basement dungeon below.

Jack, Penny and Reuben protect the secret of the watches by encasing them both in cement and depositing them in the depths of the ocean far away from the mainland. They do not want anyone to ever again be tempted to do evil and get away with it. Throughout the adventure, Reuben grows in maturity and discovers for the first time in his life a few true friends.

More summaries and resources for teaching or studying The Secret Keepers.