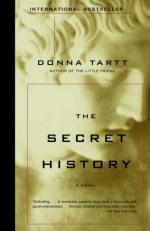 Donna Tartt
This Study Guide consists of approximately 33 pages of chapter summaries, quotes, character analysis, themes, and more - everything you need to sharpen your knowledge of The Secret History.

This detailed literature summary also contains Topics for Discussion and a Free Quiz on The Secret History by Donna Tartt.

The Secret History by Donna Tartt is an intricate glimpse into the lives of six students at Hampden College in Vermont and the impressions of one of those students who arrives mid-way through the relationships of the others.

The six main characters are Richard Papen, a California native who wishes to get out of his home town and continue his studies in Greek, the only topic in which he feels comfortable; Henry Winter, a tall, handsome trust fund baby from the Midwest, who maintains a secretive and iconoclastic existence; Francis Abernathy, a gay trust fund baby who is tormented by his mother's addictions and new husband who is practically the same age as he; Camilla MacAulay, one half of fraternal twins from Virginia who is the most caring of the group; Charles MacAulay, the other fraternal twin from Virginia who becomes an alcoholic; and Edmund "Bunny" Corcoran, a student from Connecticut who takes great pains to keep up the family front of wealth and social stature which has fallen by the wayside.

The group of six friends is involved almost exclusively in an Ancient Greek studies program run by the enigmatic Professor Julian Morrow. Morrow has a long history of hobnobbing with royalty and celebrities and some level of involvement with a rogue nation overseas, which may or may not make him the subject of federal scrutiny. Morrow is the typical scholar in that he seems to care about little else but his subject. Morrow is very fond of his students, almost casting them in a light in which they can do no wrong.

The immersion in Greek culture, legends, myths and language is complete for the group. It seems to affect Henry the most. The crux of the story regards a sequence in which Henry, Francis, Camilla and Charles perform a Bacchanal, an ancient Greek ceremony designed to allow the participants to commune with Dionysus. The ritual is legendary in that it has never been able to be recreated in the same way the Greeks performed it thousands of years ago. Through much trial and error, the four students manage to recreate the rite. In the process, a man is brutally murdered.

As a result of the murder, Bunny, who had been cast out for his lack of commitment to the rite, begins to blackmail the four students. Everything begins to fall apart and friendships turn from common threads to threats, blackmail, alcoholism, and at times, near insanity. Richard allows himself to become involved, a fact which he will regret for the rest of his days. It is never clear why this happens, beyond Richard's almost manic need to belong.

The episodes with Bunny become extreme enough that Henry decides to kill him. The murder, arranged to look like an accident, occurs at the beginning of spring. The investigation into the disappearance and death take a significant toll on every member of the group, particularly Charles who has a mental breakdown.

The friendships disintegrate when Charles pulls a gun on Henry, claiming that Henry ruined his life. The gun is taken away from Charles, and Henry, either wishing to get out of the situation or wanting to know if the Greeks were right about death equating sleep, commits suicide.

The story ends with Henry dead, Charles and Camilla separated forever from their once obsessively close relationship, Richard in California, Francis in New York recovering from a suicide attempt and enjoying his new wife, and Julian overseas somewhere, completely removed from the situation.

More summaries and resources for teaching or studying The Secret History.