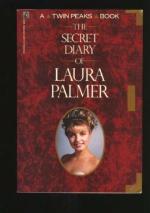 Jennifer Lynch
This Study Guide consists of approximately 38 pages of chapter summaries, quotes, character analysis, themes, and more - everything you need to sharpen your knowledge of The Secret Diary of Laura Palmer.

August 16, 1988 - Laura writes of how hard it is to be sober, of wondering whether she's the bad influence BOB always tells her she is, and of her new friend Harold Smith.

The entry ends there, and is followed by another torn page.

August 20, 1988 (1) - Laura writes of a nightmare in which she is unable to get the attention of any of her old friends, and from which she wakes up to a vision of BOB.

August 20, 1988 (2) - Laura is invited by Mr. Battis to join him and Ronnette on a new job as a "hostess" at a bar called One Eyed Jack's, another business owned by Benjamin Horne. "Walking back to the counter," she writes, she "made the decision that sobriety was not for [her]". She takes some of Ronnette's cocaine into a back room, takes...

More summaries and resources for teaching or studying The Secret Diary of Laura Palmer.