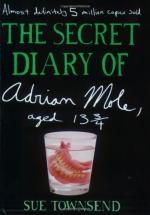 Sue Townsend
This Study Guide consists of approximately 31 pages of chapter summaries, quotes, character analysis, themes, and more - everything you need to sharpen your knowledge of The Secret Diary of Adrian Mole, Aged 13 3/4.

This detailed literature summary also contains Topics for Discussion on The Secret Diary of Adrian Mole, Aged 13 3/4 by Sue Townsend.

Before Harry Potter arrived on the scene, Adrian Mole was the most famous adolescent in English literature. Unlike Harry, Adrian Mole inhabits a comic, but very real world, filled with adolescent worries about love, sex, his future, and acne. The first in a very successful series of novels told in diary form, subsequent works record Adrian's struggles and successes into adulthood. The diary begins when Adrian is age 13 ¾, and ends with Adrian's fifteenth birthday. During the course of this year and a quarter, Adrian falls in love, suffers through his parents' marital problems, and pursues his ambition to be an intellectual and a writer. Pandora, the love of his life, is brainier than Adrian, and her parents are in a higher income class than Adrian's. She falls for Adrian after an uncharacteristic impulse to rebel causes him to wear red socks instead of the required black to school. Together they form a committee to continue the disruption. Frequent outbreaks of acne keep Adrian in fear that he will lose Pandora.

Adrian's other problems include being bullied in school, his increasing interest in sex, and his parents. Not exactly model parents to begin with, when their marriage breaks down, Adrian's home life becomes even more chaotic. After his mother runs off with the next-door neighbor, Mr. Lucas, Adrian's father, George, is temporarily cheered by his relationship with Doreen Slater. But when George loses his job, he sinks back into depression. Though she is annoying at times, often her house is the only place where Adrian and the family dog can find some peace. She also deals with Barry Kent, the school bully who demands protection money from Adrian on a daily basis. Another important member of Adrian's world is Bert Baxter, an old man whom Adrian helps out, and who, at one point, comes to live next door with Adrian's new neighbors, the Singhs, before being moved into an old folks home, where he meets Queenie. Later, they marry and set up house together. During a vacation in Scotland with his mother and her boyfriend, Adrian makes friends with an American boy named Hamish Mancini.

Despite these distractions, Adrian is determined to become an intellectual. He writes to a well-known TV intellectual, Malcolm Muggeridge, asking for information on how to be an intellectual but gets no response. He sends off a number of poems to the BBC, the national television and radio network, and is encouraged by the responses he receives from John Tydeman, who is obviously amused rather than impressed by Adrian's efforts. Toward the end of the year, Adrian's mother returns home, and shortly after, his father finds a job. Order, of a sort, is restored in the house before Adrian turns fifteen. He is now able to shave, but still legally a child and no freer to do what he wants.

Set in the early 1980s, in an unnamed town in the midlands of England, the novel portrays the effects on an ordinary working-class family of rising unemployment and cuts to education and medical services that defined the period. It was also a time when ordinary English women were beginning to express a desire for freedom from their traditional domestic roles, shown in the actions of Adrian's mother and those of Pandora and her mother. Because many of the words and references are likely to be unfamiliar to an American reader, the American edition provides an Afterword with explanations for these words. The Afterword takes the form of a letter exchange between Adrian and Hamish Mancini, an American boy Adrian meets in Scotland. Hamish asks for explanations for a list of unfamiliar words. In his letter, Adrian explains these words.

More summaries and resources for teaching or studying The Secret Diary of Adrian Mole, Aged 13 3/4.