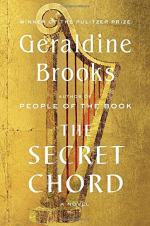 Geraldine Brooks
This Study Guide consists of approximately 63 pages of chapter summaries, quotes, character analysis, themes, and more - everything you need to sharpen your knowledge of The Secret Chord.

This detailed literature summary also contains Quotes and a Free Quiz on The Secret Chord by Geraldine Brooks.

The Secret Chord by Geraldine Brooks is a historical fiction novel that follows the life of King David of Israel. The place and character names used throughout the book use the transliteration from the Hebrew of the Tanakh. The more familiar English spellings are listed in the Characters section of this guide for reference.

The story begins with Natan the prophet setting out to chronicle the life of King David - the good and the bad. The history is to include not simply the records of battle, judgments and shifts of political change, but also to serve as evidence to the character and choices of the man himself. Natan knows much about the king’s history and rise to power since he has served him for most of his own life. He does however interview three people who shed light on additional aspects of his life.

From David’s mother, Nizevet, Natan learns about David’s early days as a shepherd on the hillside outside of Beit Lehem and how he came to be anointed as the next king by Shmuel, the prophet before him. Shammah, his brother, tells about David’s famous win over the Plishtim champion Goliath and how he became a favored member of King Shaul’s court. David’s love relationships with Yonatan and Mikhal, Shaul’s son and daughter are given a place in the story as David falls from Shaul’s graces and is forced to run for his life. Fleeing to a fortress town in the Plishtim territories, David and his men raid Amalekite villages, sharing the plunder with loyal supporters in Judah. When Saul and Yonatan are both killed in a battle with the Plishtims, David returns to Hevron where he is officially anointed by the people to be the King of Judah.

David then orchestrates the reunification of the nation. He bargains with Avner the former general of Shaul’s forces to bring the northern tribe of Israel under his rule. Included in the bargaining is the return of his first wife Mikhal, who had been sent away from him by Shaul. Once anointed king of all Israel, David sets his eyes on establishing a more centralized capital. Through careful planning and cunning, he and his men take the well-fortified city of Yeba and transform it into Ir David. The King expands the city and doubles its size. David brings the Ark of the Covenant into the city in order to centralize worship for his people.

However, David’s life hits a turning point. One night his sensual desires master him and he takes Batsheva, another man’s wife to bed. Her resulting pregnancy cannot be covered up easily, so he has the man, a captain in his army, murdered. Natan confronts David with his sin whereupon he immediately repents before the Name. However, there are consequences to the sin and Natan delivers the message of a fourfold repayment – four lives among the family of David will be touched by violence or death. The deaths of David’s newborn son, the murders of his two older sons Amnon and Avshalom and the rape of his daughter Tamar all occur during the next several years of David’s reign.

The one bright light that remains in David’s life is the birth of another son through Batsheva. Shmolo is a bright and sensitive young boy who seeks after knowledge and wisdom. He is guided in his education by Natan who teaches him all that he can and seeks out other teachers for the boy as well. As Shmolo nears manhood and David is failing in his old age, two of his brothers attempt to overthrow their father’s throne at various times. The first time, Avshalom’s rebellion is put down and he is murdered. During the second attempt by Adoniyah, Natan and Batsheva move to get Shmolo placed on the throne instead, telling David to declare his son Shmolo as his successor. As Shmolo is anointed, David hears the horns and the cries of his people celebrating a new King who he knows will lead his people with wisdom and honor.

More summaries and resources for teaching or studying The Secret Chord.