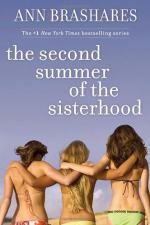 The Second Summer of the Sisterhood Summary & Study Guide

The Second Summer of the Sisterhood Summary & Study Guide Description

The Second Summer of the Sisterhood Summary & Study Guide includes comprehensive information and analysis to help you understand the book. This study guide contains the following sections:

This detailed literature summary also contains Topics for Discussion on The Second Summer of the Sisterhood by Ann Brashares.

The Second Summer of the Sisterhood, by Ann Brashares, is a sequel to the author's earlier work, The Sisterhood of the Traveling Pants. The first book follows four teenage girls through their 16th summer and this novel picks up their lives as they begin their 17th summer. The girls are lifelong friends who also share a pair of pants as part of their bond.

As summer begins, Tibby Tomko-Rollins is heading to a nearby college where she will spend several weeks studying film, while Carmen Lowell and Lena Kaligaris stay at home in Bethesda, Maryland. Bridget Vreeland abandons her plan to stay at home when she finds several letters from her maternal grandmother, from whom her father has been estranged for many years since her mother's death. Bridget decides to go to Alabama to see her grandmother and look for answers that might help her reconnect with herself after a year of floundering.

When she arrives in Alabama, Bridget impulsively decides not to tell her grandmother, Greta, who she is, but instead gets a job doing odd jobs around her house, primarily clearing out the attic where many of Bridget's mother's personal mementos are stored. As she works her way through the boxes, she learns that her mother was diagnosed with a mental illness while in college and spent time in an institution, where she contemplated suicide. As they get to know each other better, Greta gradually reveals information that helps Bridget understand her mother, father, brother, and herself better, and eventually she is able to recall finding her mother dead from suicide. Bridget also reconnects with a childhood friend, Billy Kline, and through him rediscovers her love of soccer, which used to be an important part of her life.

At film school, Tibby seeks the friendship of Alex and Maura, two fellow students who seem worldly and sophisticated to her. When her awkward, nerdy friend Brian visits, she tries to keep him away from her new friends, who treat him rudely when they do meet. Tibby is struggling with a number of issues, including the feeling that her parents prefer her two much-younger siblings to her, and her grief over the death of 12-year-old Bailey, a girl she met and befriended the previous summer. After hurting her mother's feelings with a film that pokes fun at her, Tibby changes her summer project to a film tribute to Bailey, which helps her reunite with Brian, see the shallowness of Alex and Maura, and learn which people are truly important in her life.

Carmen hopes to find love during the summer, but instead it is her divorced mother, Christina, who gets a boyfriend, sending Carmen into a tailspin of jealousy and anger. Carmen is so upset over her mother's relationship that she alienates a boy who is obviously interested in her, and ends up destroying her mother's romance with David, which break's Christina's heart. When her stepsister runs away from home and lands on Carmen's doorstep, her father, stepmother and stepbrother arrive and Carmen eventually realizes that although her family is not a traditional one, they are indeed a family. Seeing that her father's happiness with his new wife does not diminish his feelings for her, Carmen patches things up between her mother and David and realizes that other people's happiness does not have a negative effect on her own.

Lena begins the summer trying to sort out her feelings for Kostos, a boy she fell in love with while visiting her grandparents in Greece the previous summer. She is surprised when Kostos arrives on her doorstep and once she decides to face her fears about the relationship, they rekindle their romance. However, Kostos suddenly cools things off and returns to Greece with little explanation, although he insists that he still loves Lena. When her grandfather dies suddenly, Lena and her family go to Greece for his funeral and she learns the truth — Kostos briefly dated another girl and got her pregnant, and has done the honorable thing by marrying her. Although she is heartbroken, Lena is able to lean on her friends for support and in the end appears to be on the verge of a new relationship with Carmen's stepbrother.

By the end of the novel, all four girls have experienced a great deal of pain, but grown significantly because of it. Their experiences over the course of the summer also help renew their mothers' friendship, which had paralleled their own relationship but faded with time.

The Second Summer of the Sisterhood from BookRags. (c)2022 BookRags, Inc. All rights reserved.