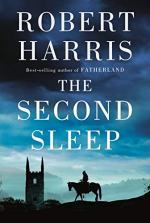 Robert Harris
This Study Guide consists of approximately 40 pages of chapter summaries, quotes, character analysis, themes, and more - everything you need to sharpen your knowledge of The Second Sleep.

This detailed literature summary also contains Quotes and a Free Quiz on The Second Sleep by Robert Harris.

The following version of this book was used to create this study guide: Harris, Robert. The Second Sleep. New York: Alfred A. Knopf, 2019.

At the beginning of the story, the narration states that the year is 1468. The story is set in England. Christopher Fairfax, a young priest, rides on horseback from the Church’s headquarters in Exeter to a small village called Addicott St. George. He has been sent there to perform a funeral for the village’s priest, who fell from a high cliff and died. In the priest’s parsonage, Fairfax finds artifacts that the narrative describes as being from before the apocalypse. The reader soon becomes aware that the novel is set not in the past, but actually 800 years in the future. An unspecified apocalyptic event killed much of humanity and destroyed the world’s technological infrastructure, sending humanity into a second medieval era. The Church has become the dominant power structure and has outlawed all pre-apocalyptic artifacts and writings. The Church states that the apocalypse was caused by God as punishment for humanity’s hubristic technological advancements. The Church has reset the calendar so that the year of the apocalypse is the year 666.

Among the deceased priest’s hidden belongings, Fairfax finds a letter from the year 2022, in which a scientist named Peter Morgenstern claims that an apocalyptic event would possibly occur soon, either in the form of climate change, nuclear war, global disease, or several other possibilities. Fairfax decides to continue investigating the village, without telling the Church leaders his plans. Fairfax also believes that some things appear strange about the other priest’s death. Fairfax soon becomes allied with a local widow named Sarah Durston, and a wealthy local businessperson named John Hancock. Sarah and Hancock are engaged to be married, although Sarah does not truly love Hancock. In a local town, Fairfax, Sarah, and Hancock attend a public lecture given by an elderly man named Nicholas Shadwell. Shadwell studies pre-apocalyptic history and technology, and thus he has been persecuted by the Church for years.

Local officials interrupt the lecture and arrest Shadwell. Fairfax meets with Shadwell in the prison and forms a tentative alliance with him. Fairfax, Sarah, and Hancock believe that there may be an underground, pre-apocalyptic building on a hill near Addicott. They believe that the building might contain pre-apocalyptic technologies, and they hope that Shadwell can help them locate it. Hancock pays Shadwell’s bail, and the four of them return to Addicott. Shadwell informs them that the Church leaders do not actually believe in religious doctrines, and that they suppress truths about the past in order to maintain the Church’s power over people. Fairfax is shocked to hear this, but he soon accepts it and internally renounces his religious faith. Fairfax and Sarah soon form a romantic connection and have sex.

The next day, Fairfax, Shadwell, Sarah, and Hancock go to the hill near Addicott. They are accompanied by 20 workers whom Hancock hired to help them dig. Eventually, they discover a concrete bunker under the ground. Fairfax, Sarah, Hancock, and Shadwell enter the bunker after the workers leave. Inside the bunker, they deduce that Peter Morgenstern formed a colony of survivors in the bunker during the apocalyptic event(s). Soon, Bishop Pole arrives, as a spy of his told him of Fairfax’s activities. The spy is Oliver Quycke, a man who pretended to be loyal to Shadwell. Quycke accidentally caused Lacy’s death by spying on him; Lacy say Quycke, became frightened, and accidentally ran off the side of the cliff. Bishop Pole confirms that all of Shadwell’s accusations against the Church are correct. However, before Pole can have Fairfax and the others arrested, a mudslide rushes into the bunker.

Everyone is killed except for Fairfax. Fairfax finds pre-apocalyptic records and technologies in another room in the bunker. Fairfax concludes that the survivors who lived in the bunker must have eventually left and settled in Addicott. Fairfax is trapped in the bunker by the mudslide, and his death appears to be imminent. At the end of the story, he can only hope that other people will discover the bunker, make the same discoveries that he made about the past and about the Church, and eventually rebuild the advancements pre-apocalyptic times.

More summaries and resources for teaching or studying The Second Sleep.