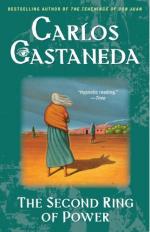 Carlos Castaneda
This Study Guide consists of approximately 49 pages of chapter summaries, quotes, character analysis, themes, and more - everything you need to sharpen your knowledge of The Second Ring of Power.

The Second Ring of Power Summary & Study Guide includes comprehensive information and analysis to help you understand the book. This study guide contains the following sections:

This detailed literature summary also contains Topics for Discussion and a Free Quiz on The Second Ring of Power by Carlos Castaneda.

The Second Ring of Power by Carlos Castaneda shows the author meeting his fellow sorcerer's apprentices, surviving plays for power, and learning to live impeccably, to dream, and to pay attention to the other world.

Carlos Castaneda, graduate anthropologist and apprentice to sorcerer Don Juan Matus, returns to central Mexico to learn from colleagues Pablito and Nestor what really happens when they leap into the abyss. He first encounters Pablito's transformed mother, Doña Soledad, who suddenly looks young, tries to seduce and restrain Carlos, and would have choked him to death had a terrible entity not emerged from Carlos head and thrown her off. Lidia, Rosa, and Josefina, whom Carlos had thought to be Pablito's sisters turn out also to be Don Juan's apprentices and an odd set of characters. Rosa is injured when they assault Carlos and he is again saved by that mysterious entity.

La Gorda, Don Juan's most competent and knowledgeable apprentice arrives just as the assault end. Before leaving for the other world with Don Genaros, Don Juan puts la Gorda in charge of the others, pending Carlos' inevitable arrival. In the unlikely event he survives the attacks that Don Juan has planned and ordered, la Gorda is to help him understand and incorporate the many parts of his training that have eluded him. Still struggling with the need to rationalize everything and understand things step-by-step, Carlos must learn or perish.

Benigno, Pablito, and Nestor, called "The Genaros" because they all apprentices of Don Genaros, return from the mountains. There is a deep rift between the male and female apprentices, and individuals see the events surrounding Carlos' arrival in significantly different ways. Carlos realizes that timidity not rationalism is holding him back from being a true sorcerer.

La Gorda proves a skilled pedagogue, patiently putting up with Carlos' foibles, keeping peace in the groups, and introducing teachings at the precise time and place that they will do the most good. She helps balance Don Juan's uncharacteristically heavy use of "power plants" on Carlos. She shows the difference between "looking" at the tonal and "seeing" the nagual. The little sisters demonstrate the second ring of power and Carlos participates in flying, exulting that it is not a hallucinogenic trick. In time he sees the lines of the world and unites with the women on an near-fatal journey deep into the other world. Carlos has much to learn before the apprentices whom he now leads can join Don Juan and Don Genaro beyond the crack.

More summaries and resources for teaching or studying The Second Ring of Power.

The Second Ring of Power from BookRags. (c)2022 BookRags, Inc. All rights reserved.