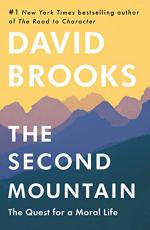 Related Topics
The Road to Character

David Brooks
This Study Guide consists of approximately 35 pages of chapter summaries, quotes, character analysis, themes, and more - everything you need to sharpen your knowledge of The Second Mountain.

This detailed literature summary also contains Topics for Discussion on The Second Mountain by David Brooks.

The following version of this book was used to create this guide: Brooks, David. The Second Mountain: The Quest for a Moral Life. RandomHouse, 2019.

In his self-help book, The Second Mountain, former New York Times columnist and news commentator David Brooks shares his musings on the highs and lows of life – both professional and personal – from the vantage point of an older, wiser and more reflective self: One’s 20s, 30s and 40s comprise what Brooks calls the “First Mountain,” dedicated to career, finance, reputation and achievement. After that, however, the realization hits: Is there not something more? For Brooks, there is: It is called the “Second Mountain,” and this life stage is dedicated to others through one’s vocation and commitments, including intellectual and religious commitments, as well as the more intimate commitments – to one’s marriage - and the more societal commitments – to one’s community.

Brooks traces this trajectory in five parts, starting with Part I, “The Two Mountains,” which is a description of the First Mountain and how individuals can be consumed by its pull, but then find themselves inevitably ready for a second climb. He then details and discusses the components of this second and superior stage in Parts II through V, under the umbrella title of “The Four Commitments,” – specifically: Vocation, Marriage, Philosophy and Faith, and, finally, Community.

The book’s Introduction explains: “If the first mountain is about building up the ego and defining the self, the second mountain is about shedding the ego and losing the self” (xvi). This is not just about the self, however, but the larger context of culture. At one point, Brooks says, “We live in a culture of hyper-individualism,” that has swung too far toward “the self” and which needs to “rebalance” (xvii) and by so doing can help people lead a “deeper and more joyful life” (xxiii). This will involve a retreat from the “ambitious, strategic and independent” to an embrace of the “relational, intimate and relentless” (xvi). The Introduction closes by having the reader take joy seriously - describing its different levels (moral joy, spiritual joy) and, crucially, by distinguishing between happiness – a victory for the self - and joy – the forgetting of oneself (xxiv): “Happiness is the proper goal for people on their first mountain … But we only get one life, so we might as well use it hunting for big game: to enjoy happiness, but to surpass happiness toward joy” (xxxiii).

Part I (“The Two Mountains”) posits a timeline for both the individual and society. It starts with the concept of a “moral ecology” or the culture given to us as we navigate life. Brooks claims that, “We all grew up in one moral ecology of another” (4). But individuals invariably challenge this culture - as Brooks’s generation did - and so the moral ecology of the 1950s, for example, which respected authority and duty, gave way to a culture of “do your own thing,” individualism and autonomy (10), with the dream of “total freedom” (11), placing achievement and self-realization over sacrifice and relationships.

Despite the excitement of this challenge to the moral ecology, Brooks notes that many eventually felt lost – “floundering in a formless desert” because few had actually asked: “What is freedom for?” (15) Young people in particular were left in “The Big Swim to Nowhere,” or were leading “The Aesthetic Life,” bumping from one experience to the next – all adding up to nothing (18), but nevertheless always on display in “the insta-gram life.” The point seemed to be busy - explained by what Brooks calls the insecure over-achiever – but to never ask, “Why am I doing this?” (22). For Brooks, that question inevitably surfaces, however, leading to a crisis of meaning (33), amidst loneliness and distrust, and sometimes taking ugly turns, including toward tribalism, which combats loneliness with group membership based on hate.

In this valley or moment of suffering, Brooks advises a step into the wilderness or “listening to your life” (41): “The reason transformation happens in the valley is because something that had hitherto been useful and pleasant needs to die. That thing is the ego … [from] … the first mountain” (49). The wilderness teaches us that achievement and intelligence are not as important as the heart and the soul (51). Paradoxically, the key to moral joy is not independence but inter-dependence (52) and not individualism but the committed life (52) – in fact, the activity of life is giving …. Tying oneself down and giving oneself away (53) Such commitment gives us identity, purpose, a higher freedom and a higher character (57-58). Because of this realization, Brooks founded Weave: The Social Fabric Project, which supports people who build healthy communities with committed relationships, often as foster parents, coaches, or even just “free haircuts to the homeless,” (71) but always as selfless, listening “community weavers” (81).

The outer process of giving oneself consists of practical commitments, honored in a wholehearted way. The remainder of the book – ‘The Four Commitments’- describes them and serves as a guide to the committed life in service of vocation, marriage, creed and community. “Say yes to everything,” (119), for example, when discerning your vocation and embrace discipline and ritual (124), without shirking from labor. For marriage, Brooks cautions against modern individualism which has reduced marriage to an alliance based on self-expression, self-discovery, self-esteem or personal growth (142) when it should be total self-giving, total abandonment - or what Brooks calls “maximal marriage,” so that it can be the ultimate moral education (144). This always involves vulnerability, achieved through different stages of intimacy, and requires continual forgiveness and humility so that two can form the “school you build together” (174). Learning also involves the loss of self or a union with the writers and thinkers of the past, revealing, in the process, one’s “inner self” (199) and then, ideally spiritual direction. Brooks comes full circle in the final chapters on community, reminding readers that this, too, is simply a “thick system of relationships” which radical individualism has injured, leaving us at risk of isolation and loneliness. The answer to this brokenness is, again, commitment to “village over self” starting with your neighbor – and he offers The Code of the Neighbor (284). Brooks ends with The Relationist Manifesto as leading to The Good Life and a Good Society (296, 304, 308).

More summaries and resources for teaching or studying The Second Mountain.