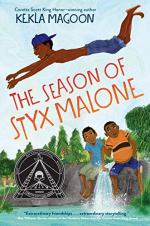 Related Topics
The Rock and the River
How It Went Down
X: A Novel
Revolution in Our Time

Kekla Magoon
This Study Guide consists of approximately 61 pages of chapter summaries, quotes, character analysis, themes, and more - everything you need to sharpen your knowledge of The Season of Styx Malone.

The Season of Styx Malone Summary & Study Guide includes comprehensive information and analysis to help you understand the book. This study guide contains the following sections:

This detailed literature summary also contains Quotes and a Free Quiz on The Season of Styx Malone by Kekla Magoon.

Caleb Franklin is 10 years old, and he is facing a summer like all of the other summers he has experienced. His wish for more excitement than his small hometown of Sutton offers begins when Caleb and his brother, Bobby Gene, are left in charge of their baby sister, Susie. They are watching 11-year-old Cory Cormier auction off a bag of fireworks when they smell the evidence of Susie's dirty diaper. Bobby Gene lifts her higher for a better smell, and Cory accepts Susie as trade for his fireworks. Of course, their parents refuse to let the “trade” stand, and Caleb's mother, Angie, takes the boys to retrieve Susie. Angie and Cory's mother, Camille Cormier, come up with the idea that the three boys should spend an hour a day doing chores together, alternating houses each day. The first thing Caleb and Bobby Gene plan to do is hide the fireworks so they do not have to return them to Cory.

When they race into the woods with the sack, they encounter Styx Malone for the first time. He is a foster child who has recently moved in nearby. From the beginning, he seems unbelievably cool to Caleb and Bobby Gene. Styx has a plan to make a series of trades, beginning with the fireworks and ending with a moped. Caleb and Bobby Gene are captivated by Styx and by his ideas, and they agree to the plan.

Over the next few weeks, Styx expands their knowledge base and their view of the world. The three boys trade the fireworks for cash and car parts. They catch a ride on a freight train and trade a lunch box for a lawn mower motor. They trade the repaired mower for Harley motorcycle memorabilia. The memorabilia is traded that for the moped. They spend the first afternoon riding the moped and enjoying the feeling of the freedom it affords. The next day, when officials from the Department of Children's Services arrive, Styx drives off on the moped. He ends up in the hospital when he is severely injured in an accident on the moped.

Caleb and Bobby Gene soon realize that Styx had never intended to have the moped as a vehicle the three of them could share. Instead, he was planning to use it to run away. Though the boys feel betrayed, they also understand Styx's life as a foster child has been very different from their own and that he does not understand about true friendship. They make it clear that they have forgiven him and will remain his friends.

Over the course of the summer, Caleb and Bobby Gene fight their parents' rules. Their father, Bobby, refuses to leave Sutton because he says they are safe in the small town. He will not take the family into Indianapolis, though it is a relatively short drive. He will not allow the boys to go into the city to visit the Children's Museum on a class field trip. As Caleb chafes against the restrictions, he and Bobby Gene finally reach their father on a level he understands. He spends a day with the boys and another friend at the museum.

Meanwhile, Styx's future is again uncertain as the Department of Child Services, known as DCS, prepares to move him again. Caleb and Bobby Gene make a case for bringing Styx into their family as a foster child, but their parents refuse. During the course of that conversation, they reveal that Styx had been devoted to a man named Marcus Pike, but DCS had removed him from that home. Caleb's mother, Angie, realizes that DCS had taken some recent steps based on incorrect information. She calls officials. A short time later, Marcus shows up, announcing that he wants Styx to be his son.

More summaries and resources for teaching or studying The Season of Styx Malone.

The Season of Styx Malone from BookRags. (c)2022 BookRags, Inc. All rights reserved.