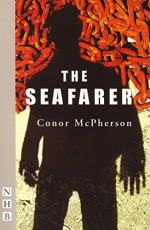 Conor McPherson
This Study Guide consists of approximately 37 pages of chapter summaries, quotes, character analysis, themes, and more - everything you need to sharpen your knowledge of The Seafarer.

The Seafarer: A Novel Summary & Study Guide includes comprehensive information and analysis to help you understand the book. This study guide contains the following sections:

This detailed literature summary also contains Quotes and a Free Quiz on The Seafarer: A Novel by Conor McPherson.

The following version of this book was used to create the guide: McPherson, Conor. The Seafarer. Theater Communications Group, Inc., 2007.

Conor McPherson’s play is divided into two scenes and two acts detailing the events of Christmas Eve morning and night for the protagonist James “Sharky” Harkin. This play set in Baldoyle, a coastal town in northern Dublin, Ireland, is written using almost entirely dialogue. Sharky is a man in his fifties who continues to have trouble keeping a job. Throughout this play, Sharky’s past experiences are revealed. He struggles with his alcohol addiction and anger issues, which have caused many of his life problems.

At the start of the play, the setting of Richard and Sharky’s basement is revealed. The place is one filled with squalor and mess. It clearly lacks a woman’s touch. On the wall sits a painting of the Sacred Heart with a light under it. The character Richard, who has recently gone blind, wakes up from his slumber on the carpet. Sharky comes in and prepares breakfast for Richard, who is very poorly dressed and smells horrid. Richard refuses to shower until Christmas. Ivan comes down the stairs after he has also been sleeping on the carpet. He has lost his glasses and cannot see well.

It is revealed that Sharky has recently been in Lahinch, in County Clare, working as a chauffeur for a man and his wife. The wife here returns later in the play as it is revealed that Sharky had lost his job because his relationship with his boss’s wife had turned into something adulterous. Ivan is scared that his wife Karen is going to kill him for sleeping over at Sharky’s. Richard and Ivan both ask for an alcoholic drink with their breakfast. Sharky does not partake as he has recently stopped drinking.

The character Nicky Giblin comes up in conversation as it is revealed that he is now with Eileen, Sharky’s old girlfriend. A resident of the town, Maurice Macken was recently electrocuted, something he survived. After his release from the hospital, he died in a fire in his house. Multiple people claim to have seen him around town after his death. This event foreshadows death later in the play. The doorbell rings and Sharky receives a gift from the man’s wife for whom he chauffeured. His relationship with the wife is revealed even more.

After a brief round of shopping for Christmas food, Richard and Sharky return to the basement. The doorbell rings, and Sharky thinks it is Nicky, whom Sharky dislikes. However, it is Ivan returning because he was yelled at by his wife. Next, Nicky arrives with Mr. Lockhart to play cards. Nicky’s clothing is fairly threadbare. However, Mr. Lockhart is wearing expensive clothing. His clothing is that of a businessman. Mr. Lockhart is a stranger to the characters aside from Nicky, who knows him from a pub, and Sharky, who seems to remember him from something. They all begin to drink and are preparing to play cards. Sharky and Mr. Lockhart are left alone as Ivan, Richard, and Nicky go to fight off the “winos” in the back lane.

Act Two begins with the table having played multiple poker rounds. Sharky and Nicky are losing a lot of money. However, Richard and Ivan, who are working together because Richard is blind and cannot see the cards, and Mr. Lockhart all have large piles of money in front of them. The game continues as the table talks about different things. Mr. Lockhart explains how he has played many games of cards in the past. Ivan recalls a Christmas Eve about 20 years ago when he won a $40,000 boat in a bet. The Briquette King, the man who bet Ivan, killed himself following the bet.

The Briquette King had asked Ivan to tell him the truth behind two families’ deaths caused by a fire. The play insinuates that Ivan was the cause for this fire. However, he was exonerated because Mr. Lockhart most likely played cards with Ivan for his exoneration. The game continues as the table is drinking poteen, a very strong alcohol. Ivan, Richard, and Nicky go out back to fight off the winos again. Mr. Lockhart tells Sharky about the cold environment that hell is. The others return, and Sharky begins to drink as well. He soon becomes angry and attempts to fight those at the table. After he has cooled down, the final round begins.

The bets run high for the last round. At first, Sharky loses with four eights and Mr. Lockhart wins with four tens. Ivan and Richard’s hand is four fours. Sharky says he is going to go with Mr. Lockhart. Ivan and Nicky begin to leave, and Ivan finds his glasses. Ivan reexamines his cards and realizes that he actually has four aces, thus making Ivan and Richard the winners. Therefore, Sharky’s soul is saved.

Mr. Lockhart believes God has had a hand in this interplay. Nicky leaves followed by Mr. Lockhart who says 'see you again' to Ivan. Richard, Ivan, and Sharky prepare to go to mass. Sharky opens a gift from Richard. The gift is a mobile phone. Ivan puts in one of the CD’s Sharky got as a gift from the man’s wife, for whom he chauffeured. John Martyn’s “Sweet Little Mystery” plays as the play ends.

More summaries and resources for teaching or studying The Seafarer: A Novel.

The Seafarer: A Novel from BookRags. (c)2022 BookRags, Inc. All rights reserved.