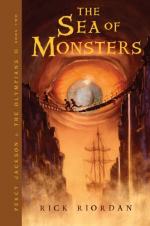 Rick Riordan
This Study Guide consists of approximately 31 pages of chapter summaries, quotes, character analysis, themes, and more - everything you need to sharpen your knowledge of The Sea of Monsters.

The Sea of Monsters Summary & Study Guide includes comprehensive information and analysis to help you understand the book. This study guide contains the following sections:

This detailed literature summary also contains Topics for Discussion on The Sea of Monsters by Rick Riordan.

"The Sea of Monsters" by Rick Riordan is the second book in the "Percy Jackson and the Olympians" series. In this book, Percy Jackson takes on a quest to save his beloved Camp Half Blood. This book is a tale of Good vs Evil as seen from the point of view of Percy. He must not only fight for the camp but the lives of those around him that he cares about. This book combines the current world with the world of the Greek mythological gods such as Zeus and Poseidon.

Percy Jackson is seen nearing the end of his seventh grade year and although excited about being done with the school, and going to Camp Half Blood for the summer, Percy is concerned about a vivid dream he has had regarding his friend Grover. Percy is not sure what the dream has meant but ultimately decides he has to focus on school. When Percy arrives at school he and his friend, Tyson, are bullied by a group of new boys that have arrived. Tyson tells Percy that the boys have a funny smell and soon the boys begin to develop into large monsters and attack Percy. Tyson comes to Percy's rescue and soon Percy's friend Annabeth also arrives to help and they soon destroy the monsters, and the school.

Percy, Annabeth, and Tyson leave to go to Camp Half-Blood immediately. When they arrive Percy finds that someone has poisoned the magical tree that was created out of Thalia, Zeus' daughter, was injured. Thalia's tree protects Camp Half-Blood but since it is weakened the campers are under constant attack from various monsters. When Percy arrives at Camp he looks at Tyson and realizes he is not a big silly kid, but is in fact a cyclops and in addition to this is also the son of Poseidon, making Tyson Percy's half-brother. Percy and the others at Camp are ordered not go out to find Grover, even though Percy has decided that Grover needs his help and may have a cure for Thalia's tree. Hermes arrives and helps Percy, Tyson, and Annabeth leave camp to go on their quest.

Poseidon sends Hippocampi to assist Percy and the others on the way to find Grover and they soon board a boat manned by a school mate and a crew of dead soldiers. The boat eventually is destroyed in an attempt to reach their destination and Percy believes everyone has died except him and Annabeth. When Percy and Annabeth reach the Island they find that Grover is being held captive by a large Polyphemus, a large cyclops. They are able to rescue Grover and the item that can save Thalia's tree, a golden fleece. While escaping Tyson shows up and helps them evade Polyphemus. When they arrive back at Camp Half-Blood with the golden fleece the tree does revive. Percy has been told of a prophecy that regards a child of the gods although it does not specify which child. It is believed by many that Percy is the only child it could be. When the fleece is put on Thalia's tree Thalia is pulled from the tree, fully recovered. Percy realizes that Thalia could be the child that the prophecy speaks of that could destroy Olympus and that this is the reason the tree had been poisoned.

More summaries and resources for teaching or studying The Sea of Monsters.

The Sea of Monsters from BookRags. (c)2021 BookRags, Inc. All rights reserved.