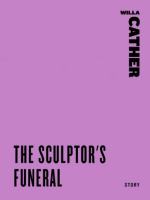 Willa Cather
This Study Guide consists of approximately 22 pages of chapter summaries, quotes, character analysis, themes, and more - everything you need to sharpen your knowledge of The Sculptor's Funeral.

This detailed literature summary also contains Quotes and a Free Quiz on The Sculptor's Funeral by Willa Cather.

The following version of this story was used to create this study guide: Cather, Willa. “The Sculptor’s Funeral.” Youth and the Bright Medusa. Aegypan Press, 2007. Pages 129 – 140.

The story takes place in the rural town of Sand City, Kansas. A group of townsmen wait at the town’s train station, as the body and coffin of a man named Harvey Merrick are due to arrive on the train. Harvey was born and raised in Sand City, but he moved to the east coast, where he was educated and became a renowned sculptor. The train arrives, and the body is accompanied by Henry Steavens, a student of Harvey’s. Harvey died of a terminal illness. The townsmen bring the body and coffin to the residence of Harvey’s parents, and Henry Steavens goes with them. Among the townsmen is a lawyer named Jim Laird. He is about 40 years old, the same age as Harvey.

At the house, the townsmen set up the coffin in the parlor and then leave, except for Jim Laird. Henry remains there as well. Henry is shocked to see how ugly the house’s interior is. Moreover, he is shocked to discover that Harvey’s mother, Annie Merrick, is a generally cruel woman. Jim Laird informs Henry that Harvey’s mother was quite cruel to Harvey throughout Harvey’s childhood. Henry is amazed by the fact that Harvey could have had such a childhood in such a place and still become such a talented and renowned sculptor of beautiful works of art. The townsmen eventually return to sit with the body for the night.

The townsmen talk about Harvey in cruel and derisive terms. They deride Harvey’s choice to become a sculptor, and they talk about Harvey’s ineptitude at farm work. Henry is shocked by such talk, as he knows that Harvey had been a renowned and successful sculptor, and that Sand City’s only wider claim to fame is its association with Harvey. After Jim overhears the men’s conversation, he launches into an angry tirade against the men. He says that they are greedy and narrow-minded and that they promote a toxic culture in Sand City. Jim defends Harvey and commends his successes. Jim and Harvey were educated at the same east coast school. Jim returned to Sand City to work as a lawyer, and he regrets doing so. The conclusion of the story states that Jim eventually dies of cold while traveling west to defend the son of a Sand City townsman in court.

More summaries and resources for teaching or studying The Sculptor's Funeral.