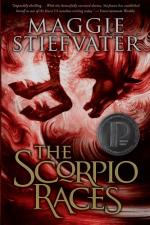 In Chapter 13, Sean stands in a pen at Malvern Yard and watches Corr trot with one of Malvern's American customers. The American asks about the capaill uisce, introducing himself as George Holly, a name Sean recognizes as Malvern's American equivalent. Holly admits that he came to Thisby because of Sean and his renown as a rider. Holly expresses interest in buying Corr and hiring Sean, but Sean knows Malvern will not sell Corr. At Holly's request, Sean allows him to hold Corr's lunge line as Holly notes Malvern could not have taught Sean about horses, and though Corr uses the distraction to pull on the lead, Sean maintains control, and Holly is not phased.

Since the car will not start in Chapter 14, Puck loads a cart with teapots and hitches Dove up. In town, they head toward Fathom & Sons, a...