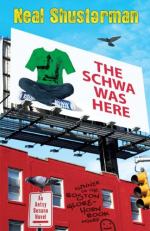 Plot Summary
+Chapters Summary and Analysis
Chapters 1-2, 'Manny Bullpucky Gets His Sorry Butt Hurled off the Marine Park Bridge' and 'The Weird and Mostly Tragic History of the Schwa, Which is Entirely True if You Trust My Sources'
Chapters 3-4, 'Quantizing the Schwa Effect Using the Scientific Method, and All That Garbage' and 'Making Big Bucks off of Stealth Economics, Because Maybe I Got Some Business Sense'
Chapters 5-6, 'Which Is Worse: Getting Mauled by a Pack of Dogs, or Getting Your Brains Bashed Out by a Steel Poker?' and 'As If I Didn't Already Have Enough Annoying Things to Do Every Day, Now I Gotta Do This'
Chapters 7-8, 'The Lowest-Paid Male Escort on the Entire Eastern Seaboard, Except for Maybe the Bronx' and 'Are Those Your Fingers in My Mouth, or Are You Just Happy to Not See Me?'
Chapters 9-10, 'Maybe They Had It Right in France Because Getting My Head Lopped Off by a Guillotine Would Have Been Easier' and 'Earthquakes, Nuclear Winter, and the End of Life as We Know It, over Linguini'
Chapters 11-12, 'The Youngest Doctor in Sheepshead Bay Gets Held Hostage When He Least Expects It' and 'A Horror Movie Blow-by-Blow, with the Undisputed Queen of the 3-B Club'
Chapters 13-14, 'A Russian Train, a Pulsing Vein, and My Mother's Bag of Snails' and 'More Than I Ever Wanted to Know About the Schwa's Childhood'
Chapters 15-16, 'Vortex in Aisle Three - Can Someone Please Clean Up the Ectoplasmic Slime?' and 'A Late-Night Trip to the Land of Beef That Could Turn a Person into a Vegetarian'
Chapters 17-18, 'A Traumatic Experience I'll Live to Regret, Assuming I Live' and 'Larger Than Life, in Your Face, Undeniable Schwa'
Chapters 19-20, 'The Schwa Gets Radiation Therapy in a Room That Doesn't Smell Too Good No Matter How Much It's Disinfected' and 'The Weird Things Kids Do Don't Even Come Close to the Weird Things Parents Do'
Chapters 21-22, 'Why I Started Vandalizing Brooklyn' and 'My Anonymous Contribution to Popular Culture and to My Parents' Phone Bill'
Free Quiz
Characters
Objects/Places
Themes
Style
Quotes
Topics for Discussion
Order our The Schwa Was Here Study Guide

Neal Shusterman
This Study Guide consists of approximately 88 pages of chapter summaries, quotes, character analysis, themes, and more - everything you need to sharpen your knowledge of The Schwa Was Here.

The Schwa Was Here Summary & Study Guide includes comprehensive information and analysis to help you understand the book. This study guide contains the following sections:

This detailed literature summary also contains Topics for Discussion and a Free Quiz on The Schwa Was Here by Neal Shusterman.

'The Schwa Was Here' is the story of how a young Italian teenager called Antsy meets a boy called Calvin Schwa, nicknamed the Schwa. The Schwa is so ordinary that he gets ignored by almost everybody and is functionally invisible in a crowd. Antsy and the Schwa use this 'Schwa effect' to make money by carrying out dares, but this backfires when the Schwa sneaks into Old Man Crawley's apartment and is caught. Crawley sets them to work as his dog-walkers, and pays Antsy to be his blind granddaughter's escort. Antsy and the Schwa soon become rivals for her affection. Eventually, Antsy manages to help the Schwa by finding out the truth about his mother's disappearance. The Schwa realizes that he is not going to just disappear from lack of attention and so begins to be able to come to terms with his 'invisibility.'

Antsy's father works for a plastic-making company and has given his 'indestructible' plastic dummy to his son to test. Antsy, and his friends Howie and Ira, decide to throw it off a bridge to see if it will break. While doing this, they suddenly become aware that another boy has been watching them. He introduces himself as Calvin Schwa. Ira tells Antsy all about 'the Schwa effect,' which makes it difficult for others to notice Calvin.

Antsy begins to notice the Schwa a lot more around school and soon makes friends with him. He decides to use the Schwa effect for their own gain by charging students at school for tasks that only the Schwa can carry out. They also take bets on dares. This is going well until the Schwa is dared to go into the apartment of a reclusive old man called Crawley, and steal one of his dog bowls. The Schwa does this, but he is caught by the old man. Antsy runs in to help his friend, and soon both of them are in trouble. Crawley decides not to tell the police, but to give them 'community service' instead. They will work as his dog walkers to pay off their debt to him.

One day Crawley tells Antsy that he has another job for him. He will pay him to be his blind granddaughter's escort. The granddaughter is called Lexie, and soon both Antsy and the Schwa begin to have feelings for her. This causes some rivalry and bad feelings between them. Lexie decides to fire Antsy as her escort and promote the Schwa instead. The Schwa thinks she likes him, but she was actually giving Antsy the opportunity to ask her out properly. Antsy and Lexie begin to date, and when the Schwa finds out he is extremely upset. Antsy tries to apologize, and the Schwa explains why getting Lexie's attention was so important to him. He thinks he is going to vanish one day like his mother did. She disappeared while they were in the supermarket, and the Schwa believes that this is his fault for forgetting about her for a few moments.

Antsy wants to help his friend, so begins to look into his mother's disappearance. He finds the Night Butcher at the supermarket, who is willing to tell them the truth about that day. Meanwhile, the Schwa is determined not to let himself disappear like his mother, so he tries to demand attention by putting his face on a billboard over the expressway. This costs him his college fund. However, the traffic from the expressway is diverted and nobody sees the billboard. The Schwa is distraught. Antsy takes him to see the Night Butcher, who explains that the Schwa's mother actually ran away with the butcher. The Schwa is angry at first, but later he is relieved to know that he will not simply vanish into thin air.

The Schwa confronts his father about his mother, and finds letters that she wrote to him. One day the Schwa disappears and his house is up for sale. Antsy spends a long time looking for him, eventually realizing that he has gone to find his mother. Later Antsy receives a letter from the Schwa saying that he found his mother and is travelling with her for a while. He is finally happy. Meanwhile, Crawley has become very fond of Antsy and through his friendship has learned to appreciate the world again. He gets Antsy's father fired from his old boring job, then offers him a much better paid one running his new restaurant. This is a happy ending for everyone.

More summaries and resources for teaching or studying The Schwa Was Here.

The Schwa Was Here from BookRags. (c)2022 BookRags, Inc. All rights reserved.