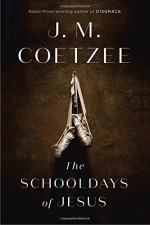 Related Topics
The Childhood of Jesus

J. M. Coetzee
This Study Guide consists of approximately 41 pages of chapter summaries, quotes, character analysis, themes, and more - everything you need to sharpen your knowledge of The Schooldays of Jesus.

The Schooldays of Jesus Summary & Study Guide includes comprehensive information and analysis to help you understand the book. This study guide contains the following sections:

This detailed literature summary also contains Quotes and a Free Quiz on The Schooldays of Jesus by J. M. Coetzee.

The following version of this book was sued to create this study guide: Coetzee, J. M. The Schooldays of Jesus. Viking, 2016.

The Schooldays of Jesus takes place in the fictional town of Estrella, which is located in an unnamed Spanish-speaking country. The book’s central characters are a man named Simón, a woman named Inés, and a six-year-old boy named Davíd. At the beginning of the novel, Simón, Inés, and Davíd arrive in Estrella from a different town called Novilla. They are fugitives from legal officials who wish to take Davíd away because Simón and Inés are not Davíd’s parents or legal guardians. Simón finds work on a nearby farm, and he and Inés discuss what to do with regards to Davíd’s schooling. They find a tutor named Sennor Robles, but his teaching style proves far too abstract and impractical. The three sisters who own the farm on which Simón works take a special interest in Davíd, and they say they will pay his education fees once Simón and Inés enroll him in a school.

Simón and Inés eschew the public school system for fear that Davíd will be recognized by legal officials. So, instead, they enroll Davíd in the local Academy of Dance. The teacher, Ana Magdalena Arroyo, espouses a highly spiritual interpretation of the meaning of dance, and it soon becomes apparent that Davíd will receive no general education at the academy. However, because Davíd enjoys the academy so much, Simón and Inés decide to keep him enrolled there. Soon, Davíd says that he wishes to become a boarder at the academy, stating that Ana Magdalena understands him in a way that Simón and Inés do not. Unable to deny Davíd any wish, Simón and Inés allow Davíd to become a boarder. Not long after, Simón learns that Dmitri, the academy’s janitor who says that he is in love with Ana Magdalena and who spends much time talking to the students of the academy, occasionally shows pornographic pictures to the students. Simón tells Dmitri to cease this bad behavior at once or he will report Dmitri.

Not long after Simón’s meeting with Dmitri, Dmitri and Ana Magdalena are reported missing from the academy. Simón assumes that Dmitri and Ana Magdalena ran away together, but then Simón and Davíd accidentally discover Ana Magdalena’s strangled corpse in the academy. A few days later, Dmitri shows up at the police station and files a statement saying that, in his frustrated infatuation, he raped and then strangled Ana Magdalena. Dmitri awaits trial in jail, and he asks Simón to burn the personal papers located in Dmitri’s file cabinet at his former workplace. During his trial, Dmitri pleads guilty and demands the harshest sentence, but instead, the judge sentences him to a year in a mental hospital under the study of psychologists and psychiatrists, after which Dmitri’s case will be reviewed. Simón obtains Dmitri’s personal papers with the intention of handing them over to the authorities, but he finds that they contain love letters from Ana Magdalena to Dmitri. Simón cannot decide what the righteous moral decision is with regards to the letters.

Dmitri then shows up at Simón’s house, as the security at the mental hospital is apparently very lax. Dmitri says that he will soon go to the salt mines and demand a lifetime sentence there to pay off his moral debt while Simón will be left with the maddening moral quandary of the letters. Dmitri goes back to the mental hospital, and Simón soon realizes that the love letters are real, meaning that Dmitri did not kill Ana Magdalena out of frustrated love, but simply because he could and because he felt like doing so. Simón goes to Sennor Arroyo, the husband of Ana Magdalena, and asks if the Academy of Dance will reopen. Señor Arroyo is unsure, and Simón is left in further uncertainty with regards to his responsibilities towards Davíd. A little later, Simón and Davíd attend an academic debate between Señor Arroyo and an academic named Señor Moreno. Dmitri interrupts the debate and demands Señor Arroyo’s forgiveness for the murder of Ana Magdalena. Simón sees this as a ploy by Dmitri to avoid the salt mines. Simón calls the police, and they take Dmitri away. At the end of the novel, Simón learns that the Academy of Dance will reopen and will be run by Ana Magdalena’s sister-in-law, Señora Mercedes. Simón debates whether or not Davíd should return to the school. In the last scene, Simón goes to Mercedes and asks her to teach him the ways of dance.

More summaries and resources for teaching or studying The Schooldays of Jesus.

The Schooldays of Jesus from BookRags. (c)2022 BookRags, Inc. All rights reserved.