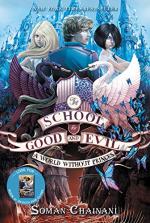 The School For Good and Evil #2: A World Without Princes Summary & Study Guide

Soman Chainani
This Study Guide consists of approximately 57 pages of chapter summaries, quotes, character analysis, themes, and more - everything you need to sharpen your knowledge of The School For Good and Evil #2.

The School For Good and Evil #2: A World Without Princes Summary & Study Guide Description

The School For Good and Evil #2: A World Without Princes Summary & Study Guide includes comprehensive information and analysis to help you understand the book. This study guide contains the following sections:

This detailed literature summary also contains Quotes and a Free Quiz on The School For Good and Evil #2: A World Without Princes by Soman Chainani.

The following version of this book was used to create this study guide: Chainani, Soman. The School for Good and Evil: A World Without Princes. Harper, 2014. Paperback.

Agatha and Sophie return to Galvedon after they choosing each other and creating their own happy ending. However, Agatha’s unhappiness prompts her to wish for a new happily ever after life. The wish sends them back to the School for Good and Evil. The School has changed into the School for Girls and Boys as Sophie and Agatha’s ending has ruined the love between boys and girls within the fairy tale universe. Lady Lesso and Professor Dovey have been replaced by a new Dean named Evelyn Sader, who uses butterflies to spy on her students. Sophie, angry at Agatha for her wish, embraces the Dean’s plan to kill the boys, while Agatha tries to find a way to reach Tedros. With Hester and Anadil’s help, Agatha sneaks into the School for Boys in an effort to kiss Tedros. However, Sophie followers her into the school. When Agatha confronts Tedros and decides to kiss him, Sophie fires a spell between the two. An angry Agatha leavesTedros.Tedros is convinced by Aric, his right hand man, that Agatha had brought Sophie with her to kill him. This sparks the true war between the boys and the girls. Tedros calls for a trial to determine who will win. Ten girls and ten boys will participate.

The Dean decides to go ahead with the trial and announces that Agatha and Sophie are guaranteed two spots on the trial team. The other girls compete for the remaining eight spots through various challenges. Meanwhile, Tedros and Tristan hide the Storian in the School Master’s tower and decide to wake up the professors from Dean Evelyn’s sleeping spell. Tedros uses Hort’s ability to transform into a man wolf and has him howl to bring the teachers back to the school. However, the teachers take control of the school from Tedros. They lock him in the Doom Room after they are unable to find the Storian in the School Master’s Tower. Agatha, Hester, Anadil, and Sophie try to find a way to retrieve the Storian from the School of Boys. Evelyn tells the story of King Arthur and his wife Guinevere. Guinevere cheated on the King after he forced her to marry him. In that story, King Arthur uses one of Merlin’s spells to temporarily turn Lancelot into a woman. Then King Arthur attacks Lancelot. Agatha and the girls realize that Helga, a female gnome, is actually Yuba, their previous male professor who is using the spell to keep himself hidden within the School for Girls.

The girls confront Yuba and learn that he helped Merlin create the spell. However, Yuba only has enough of the potion remaining to turn one girl into a boy for three days. He stages a challenge to determine which girl would be the best for the role. All but Sophie fail, and Sophie takes the potion. Yuba and Agatha send her across the water, where Sophie wakes up in her new boy body. She tells the professors that her name is Filip of Mount Honora. Filip is placed with Tedros in the Doom Room. The person who scores the lowest between the two of them will be punished. However, the boys team up to help Filip cheat and beat Tedros. Filip is then given Storian guarding duty, but he is unable to find the Storian.

Meanwhile, Agatha investigates the Dean by using an invisible cape she found underneath Beatrix’ bed (unaware that it belongs to Sophie). In the library, she learns that the Dean has replaced all fairy tales with depictions of princesses overthrowing their princes or fighting for themselves. The turtle guarding the library gives her a book written by Evelyn’s brother, August Sader. Sader, Agatha’s previous professor, was killed fighting the Evil School Master. Supposedly, Evelyn Sader was only August Sader's half-sister.

Agatha goes to the Dean’s office and overhears Yara talking to the Dean, even though Yara is known to never speak. After the two leave, Agatha sneaks into the office and finds rules for the trial, a map of the Blue Forest with the Cyan Caves circled, and the recipe for Merlin’s Spell. Agatha sneaks out to see why the Cyan Caves are so important. However, when she arrives at Cyan Caves, Evelyn’s butterflies rip her invisible cape from her, revealing that she is aware that Agatha has been sneaking around and knows Sophie is in the School for Boys.

Agatha returns to class and reveals to Hester and Anadil that the Dean is aware of their plan. The Dean tells a fake story about herself, and Agatha’s disbelief allows her to see a vision from August Sader about the Dean’s true past. Evelyn was a former teacher at the School for Evil who loved the School Master. She was unable to make him love her, however, for he was convinced his true love would arrive in the form of a reader. She uses her butterflies to cause mayhem in the School for Good, and is eventually evicted from the School. However, the School Master promises her that she will be able to return if his love fails him. This is what allowed her to return after Sophie and Agatha defeated him. Agatha realizes that the Dean is trying to bring the School Master back, but Evelyn knocks her unconscious.

Sophie, still disguised as Filip, begins to befriend Tedros and protects him from Aric and the other students. She talks to him about why he wants to kill her and Agatha, and Tedros reveals that he was turned into the villain when Agatha attacked him (still not realizing that it was Sophie who attacked them). Sophie tells him that Sophie only wants a friend and that she believes Tedros will be able to find another love. However, Tedros says there is only one true love in the fairy tale world. The next day, Sophie wins the final trial. She is allowed to choose one other boy to join. Ignoring the fact that Hort constantly helped Sophie cheat to get her spot as team captain, Sophie chooses Tedros and immediately regrets it when she sees a red lantern in the School for Girls.

Agatha wakes up three hours after the trial begins and learns that Sophie is already in the Blue Forest. She confronts Evelyn, who tells her that Agatha is only seeing what she wants to see and that she, the Dean, is not responsible. Agatha is thrown into the Blue Forest and learns that Sophie is in the woods still disguised as Filip. She tries to find her and is instead found by Hester and Anadil. Aric arrives, capturing Beatrix and her friend with a plan to kill them. Hester saves Beatrix and tells Agatha to run and find Sophie as the other boys arrive. It is revealed that Hester escapes, covered in her own blood, and the other girls eventually surrender.

Meanwhile, Sophie, still disguised as Filip, stays with Tedros. The two find Yara, dying after having her throat slashed. Yara reveals herself to be Tristan who was alienated by the boys and helped the Dean hide the Storian so he could stay in the School for Girls. He recognizes Sophie through her disguise and tells her that the pen is hidden in her storybook. Tedros begins to see Filip becoming more feminine, and Sophie forgets to hide her voice. Tedros leans in to kiss Filip as Agatha arrives.

Agatha berates Sophie, realizing that it is Sophie’s fault Agatha had not kissed Tedros earlier. Sophie pleads to Agatha to forgive her as she only wants Agatha’s friendship. The Dean arrives with the Storian as Agatha chooses Tedros over Sophie. However, when Agatha kisses Tedros, the Dean stops the pen from writing The End. She tells Sophie that it was actually her wish for her mother that brought them back to the school. Sophie says she will do anything to see her mother again, and her mother appears before her as Agatha and Tedros are captured. Sophie's mother tells Sophie to kiss her. Sophie kisses her, and the mother turns into the School Master. He immediately kills Evelyn and moves to kill Tedros. However, Agatha is able to grab Tedros. She is able to drag herself and Tedros away from the school as Sophie is left with the School Master. Sophie believes that the School Master is the only one who loves her.

More summaries and resources for teaching or studying The School For Good and Evil #2: A World Without Princes .

The School For Good and Evil #2: A World Without Princes from BookRags. (c)2022 BookRags, Inc. All rights reserved.