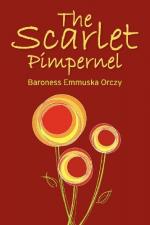 Baroness Emma Orczy
This Study Guide consists of approximately 32 pages of chapter summaries, quotes, character analysis, themes, and more - everything you need to sharpen your knowledge of The Scarlet Pimpernel.

This detailed literature summary also contains Topics for Discussion and a Free Quiz on The Scarlet Pimpernel by Baroness Emma Orczy.

When Chauvelin and his soldiers arrive at the cabin, Chauvelin gives strict orders that no one is to move as they surround the cabin until Lord Blakeney arrives, even though they know there are four fugitives in the cabin. Lady Blakeney follows the soldiers up to the cabin and tries to warn its occupants, but is caught by Chauvelin. Lady Blakeney waits in terror with the soldiers, torn between warning her brother and risking his death and staying silent and allowing her husband to walk into a trap. When Lady Blakeney hears her husband approaching the cabin, she can no longer remain silent and she screams to her brother to fight.