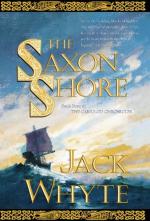 Jack Whyte
This Study Guide consists of approximately 42 pages of chapter summaries, quotes, character analysis, themes, and more - everything you need to sharpen your knowledge of The Saxon Shore.

This detailed literature summary also contains Topics for Discussion and a Free Quiz on The Saxon Shore by Jack Whyte.

The Saxon Shore by Jack Whyte tells the story of Merlyn Britannicus who realizes his destiny when he comes across his infant cousin, Arthur Pendragon. It's Merlyn's task to protect the child and prepare him for his own destiny - to unify Britain's clans and protect Excalibur.

The story begins with Merlyn saving the life of his cousin's infant child. The two are cast into peril as their small boat is taken over by soldiers, and the child is tossed into the water. Merlyn dives in and saves him, but the two are brought onto the galley as captives. Merlyn realizes that he speaks the language of his captors, and he tells them his story. They give him a chance to prove that he is telling the truth. He claims to be a good friend of his captor's brother. They hold the child until he can bring back the brother.

Merlyn travels to his home, Camulod. Along the way, he finds his murdered cousin and realizes that his cousin is innocent of the wrongdoing of which he had been accused. When he gets back to Camulod, Merlyn realizes that he has lost touch with the people there. He determines to be a better leader. He brings his friend, Donuil, back to his homeland so he can prove his friend's existence and get the child back. Along the way, they stop at a leper colony so Merlyn's friend Lucanus can bring supplies to the lepers. Lucanus stays there while Merlyn and the other soldiers are in Eire.

Although it's a strange country and a new experience, Merlyn finds a connection with the people. The king recognizes him as family and returns Arthur, the baby, to him. They discuss politics, and Merlyn shows the people of Eire the benefits of using horses in battle. He returns back to Camulod with the child, and finds that his brother, Ambrose, is struggling to unify the people of Camulod. They have a harsh winter together, which helps them develop a stronger bond, uniting the infantry and cavalry. They set out to defeat their enemy. Along the way, they stop at the leper colony and find it filled with dead lepers. There is evidence that one survived, and Merlyn joins the others in search of the man. He finds him, tries to save his life, but fails.

The soldiers find their stolen horses, completing their mission. Through negotiations, war is avoided, and alliances are established. When Merlyn returns home, he faces a time of peace where he can concentrate on rearing Arthur. During this time, he goes on a trip with his brother. They encounter many people from different lands. It offers Merlyn a new perspective on the unification of peoples. On the way home, he becomes ill.

Back at home, Merlyn confronts the fact that he has leprosy. Even as he faces this fact, attackers kill one of his friends and harm the children, including Arthur. Merlyn and his comrades realize they must get the child to safety, but Merlyn is fearful of the fact that leprosy will keep him from caring for the child properly. His friends veto this thought and may make plans to keep Arthur safe in the lands of their enemy Derek, King of Ravenglass.