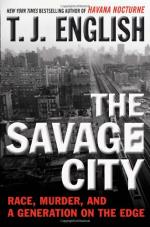 The Savage City: Race, Murder, and a Generation on the Edge Summary & Study Guide

T. J. English
This Study Guide consists of approximately 76 pages of chapter summaries, quotes, character analysis, themes, and more - everything you need to sharpen your knowledge of The Savage City.

The Savage City: Race, Murder, and a Generation on the Edge Summary & Study Guide Description

The Savage City: Race, Murder, and a Generation on the Edge Summary & Study Guide includes comprehensive information and analysis to help you understand the book. This study guide contains the following sections:

This detailed literature summary also contains Topics for Discussion on The Savage City: Race, Murder, and a Generation on the Edge by T. J. English.

Author T.J. English introduces 'The Savage City' with a brief retrospect outlining the events leading up to what he describes as the inevitable hostilities pervading New York during the 1960's. He explains that his book discusses the ten-year period from 1963-1973 when New York City descended into mayhem. These events began not in New York, but far away and in the unlikely setting of rural Clarksdale, Mississippi. It was here on October 2, 1944, that the first mechanical cotton picker was demonstrated. The introduction of this machine was like the detonation of a demographic bomb in that it made sharecropping obsolete and forced the African Americans living in the south to migrate north in search of new opportunities. This huge and hasty exodus is historically considered to be one of the largest and most rapid internal movements within the United States ever. In consequence, the Irish, Italian, and Eastern European Jewish neighborhoods of New York City found themselves the recipients of a flood of poor, desperate Negroes from the south. They were greeted with hostility and bitterness. Meanwhile, the New York City police department was manned almost exclusively by working-class white men living in Brooklyn and the boroughs, the very neighborhoods that were becoming "overrun." For this reason, many of the police force chose to live elsewhere. This led to an attitude of exile and resentment, as their city began to seem more alien and impossible to salvage with every passing day. In turn, police bigotry and brutality towards African Americans reached epic proportions. The black citizens dreaded nothing more than the prospect of winding up in a police station as this was a guarantee of intimidation, humiliation, and merciless violence.

For the police force, this was business as usual. Soon, the African Americans living in New York began to hear of happenings in the South where blacks were standing up for themselves. This attitude of justified indignation was split into two camps: Martin Luther King's peaceful resistance and the violence-begets-violence posture of Malcolm X. English goes on to explain that his book is essentially a chronicle of three parallel lives: that of George Whitmore, a young Negro who is coerced into confessing to a series of dastardly crimes he did not commit; Bill Phillips, who is more a hustler than NYPD cop, who turns a snitch exposing the police department's most devastating scandal in history; and Dhoruba Bin Wahad, a black militant and key member of the Black Panther Party. English explains that these three men form points on a triangle: the scapegoat, the foot soldier, and the warrior. English explains that during this time, the NYPD was charged with the impossible task of holding back a tidal wave of revolution. Within the maelstrom there was also hope - a city yearning to be something better. English implores us to revisit this all-but-forgotten era of hope and desperation; a time of experimental democracy and deadly hostility.

More summaries and resources for teaching or studying The Savage City: Race, Murder, and a Generation on the Edge.

The Savage City: Race, Murder, and a Generation on the Edge from BookRags. (c)2022 BookRags, Inc. All rights reserved.