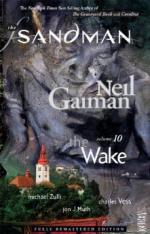 Plot Summary
+Chapters Summary and Analysis
Chapter 1: Which Occurs in the Wake of What Has Gone Before
Chapter 2: In Which a Wake is Held
Chapter 3: In Which We Wake
Epilogue: Sunday Mourning
Exiles
The Tempest
Free Quiz
Characters
Objects/Places
Themes
Style
Quotes
Topics for Discussion
Order our The Sandman: The Wake Study Guide

Neil Gaiman
This Study Guide consists of approximately 29 pages of chapter summaries, quotes, character analysis, themes, and more - everything you need to sharpen your knowledge of The Sandman.

The Sandman: The Wake Summary & Study Guide includes comprehensive information and analysis to help you understand the book. This study guide contains the following sections:

This detailed literature summary also contains Topics for Discussion and a Free Quiz on The Sandman: The Wake by Neil Gaiman.

Sandman: The Wake by Neil Gaiman is a work of fiction comprising three separate short stories. Each story is adorned with somewhat gruesome and eerie illustrations created by famed Sandman penciller Michael Zulli and others. The majority of the story is tied in with the illustrations because the book is a graphic novel.

In Chapter 1: "Which Occurs in the Wake of What Has Gone Before," Delirium approaches the rest of the family singing, "One for sorrow, two for sorrow, three for sorrow, four for for for I don't know. But I'm bored of sorrow, five for three two one, six for gold, seven for a magpie who tells me where to go...'' Chap. 1, p. 5

Destiny, Despair, Desire and Death wait at the crossroads of the Quinsy Mountains. Delirium makes her entrance. Each has come from his or her own realm to discuss and mourn the death of their brother, Morpheus, the Sandman. Delirium, the youngest of the Endless family, says she is surprised that Destruction is not present. Despair says that it is apparent that all who will come are already there. Delirium says that when they thought Despair was dead, they all came. Destiny announces that their brother is dead.

The scenes move relatively quickly from this point. Arrangements are made for a wake and a funeral to mourn Dream, perhaps the most well known and dynamic member of the Endless.

In Chapter 2: "In Which a Wake is Held," people begin to learn about Dream's death and the mourning begins. The reader learns that Dream is not truly dead, that he is simply in a new realm. Dream is immortal and can never truly die.

Many characters from past books arrive at the wake while the family builds a place of remembrance at Fiddler's Green.

In Chapter 3: "In Which We Wake," eulogies are given. Matthew remains at Dream's side and helps him work through the fear of facing his family once again in this new incarnation. Dream has already seen Destruction. The chapter ends with the family waiting in the dining hall.

In "Epilogue: Sunday Mourning," Robbie Gadling attends a Renaissance Fare with his girlfriend Gwen. They discuss the irrelevance of most of the events and fractured history that take place at those events. Robbie, off on his own, meets with Death, and they discuss Dream's death and the fact that Robbie, too, may die one day. That day is not today.

In "Exiles," Master Li is sent by the emperor into exile because of the actions of his son. Master Li gets lost in the desert and finds Dream. Dream offers Master Li the chance to stay and provide counsel. Master Li says he must fulfill his destiny.

In "The Tempest," the final story, William Shakespeare's final play is discussed. Gaiman shows the struggles faced by Shakespeare throughout his career, how he saw his work as both a gift and a burden. In the end, Shakespeare, like Gaiman, lays down his quill for good.

More summaries and resources for teaching or studying The Sandman: The Wake.

The Sandman: The Wake from BookRags. (c)2022 BookRags, Inc. All rights reserved.